Every Pop-Culture Easter Egg in The Mitchells vs. the Machines – Vulture 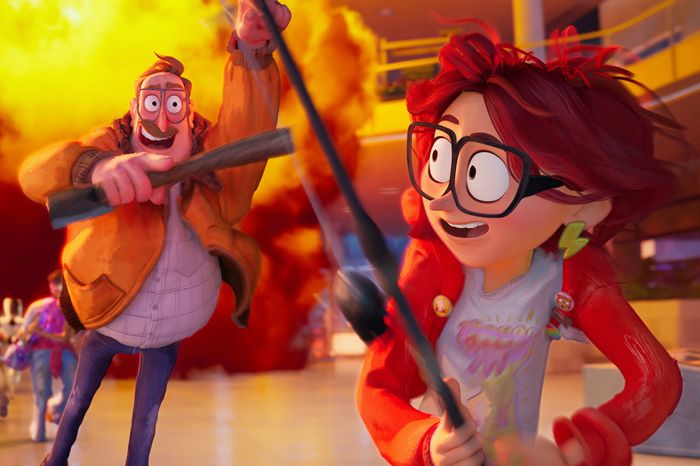 Katie Mitchell (Abbi Jacobson), the protagonist of the year’s best animated movie so far, The Mitchells vs. the Machines, loves movies. Her goal in life is to become a filmmaker, and she has spent her childhood making movies that are chock-full of references and homages to the pop culture she admires. So it should be no surprise that the Netflix film itself is absolutely full of Easter eggs and shout-outs to all sorts of genre flicks that inspired The Mitchells vs. the Machines in the first place.

While Katie and the rest of the Mitchells — Rick (Danny McBride), Linda (Maya Rudolph), and Aaron (Mike Rianda, who also directed the movie) — embarked on a cinematic journey to stop a potentially world-ending machine uprising, Vulture was on a quest to track down as many pop-culture references as we could find. Here, what to watch for.

As a major film buff with a tendency toward genre fare, it’s no surprise that Katie’s bedroom walls are covered with somewhat obscure movie posters. There’s one for Isle of the Snake People, a 1971 Mexican movie starring Frankenstein’s Boris Karloff; It Came From Beneath the Sea, a 1955 film about a giant octopus that attacks San Francisco; and Creature With the Atom Brain, which was released as part of a double feature with It Came From Beneath the Sea. There’s also a poster for the fictional movie Roboslayers 4, which is a bit of foreshadowing of the Mitchells’ future as, well, roboslayers!

Don’t overlook this Easter egg! (Get it?) Katie’s socks have the same iconic pattern as the carpet of the Overlook Hotel in Stanley Kubrick’s The Shining. You can actually see these socks earlier when the Columbia logo becomes all Katie-fied and the torch lady sticks out a cartoon leg wearing the same Shining sock.

In addition to the California College of Film pin and her rainbow pin (foreshadowing!), Katie also sports two pins that reference other movies. Her backpack has a pin that reads “Lawn Wranglers,” a nod to Wes Anderson’s debut film, Bottle Rocket. On her sweatshirt, she’s got a pin of a bomb with the phrase “Hi there!” written on it, a reference to the infamous bomb at the end of Dr. Strangelove.

In Katie’s video application to film school, we get a glimpse of her Mt. Rushmore of directors. The four people she looks up to the most are Greta Gerwig, the director of Lady Bird, Little Women, and the star of the scrapped How I Met Your Dad pilot; Céline Sciamma, the French director of Girlhood and Portrait of a Lady on Fire; Lynne Ramsay, the director of We Need to Talk About Kevin and You Were Never Really Here; and Hal Ashby, the director of Harold and Maude.

Katie’s filmography, as seen in her college-application video, is full of parodies and homages to classic films. We won’t list them all here (pause at the 5:30 mark to see them all), but highlights include Dial B for Burger, a riff on Alfred Hitchcock’s Dial M for Murder; Portrait of an Idiot on Fire, a spoof of Sciamma’s Portrait of a Lady on Fire; Going There, a spoof of Ashby’s Being There; Katie and Aaron, her brother-sister remake of Thelma & Louise; and They Live(D) in the Jurassic Period, seemingly a combination of John Carpenter’s cult classic They Live and dinosaurs.

Rick’s old video camera is not a PAL product; instead, it’s a Sony camcorder because The Mitchells vs. the Machines was made by Sony. ABC, baby!

As the Mitchells drive west, the Talking Heads song “(Nothing But) Flowers” plays. The lyrics are quite appropriate for the movie, with David Byrne singing from the perspective of somebody living in a postapocalyptic setting. It’s a beautiful place, though; basically, a flower-filled Garden of Eden and the survivors have returned, harmoniously, to nature. The singer, however, misses “Dairy Queens and 7-Elevens” and desperately wants to go back to the convenience of technology and modern society. Relatable!

Silicon Valley tech wiz Mark Bowman (Eric Andre) is clearly a spoof of Facebook creator Mark Zuckerberg — only Bowman’s creations are much less subtle in the ways they go about destroying society.

PAL, voiced by Oscar-winning actress Olivia Colman, is the villain behind the machine uprising, but you can’t help but feel a little bad for her after Bowman literally treats her like garbage. PAL’s name is a clear homage to HAL, the AI that goes rogue in 2001: A Space Odyssey. The heads of the robots — black screens with a glowing red dot on them — further this comparison.

PAL Labs also makes cars, and the talking car we see during the presentation has a similar look to KITT, the car from the old TV show Knight Rider.

The robots were intentionally styled after ASIMO, a humanoid robot created by Honda in 2000. The robot, whose development was discontinued in 2018, was named after Isaac Asimov, author of I, Robot and the brain behind Asimov’s Three Laws of Robotics, which the bots in The Mitchells vs. the Machines flagrantly violate.

The creators of The Mitchells vs. the Machines made a whole robot language that appears onscreen whenever they’re up to something, and these flashes of robot language text are full of little extra gags, though some are mundane. If you want to translate them for yourself, the secret is to find the scenes in which the movie cuts to a new location like “Paris, France,” as the robot-language text is displayed underneath the English text, giving your codex a nice starting point.

When PAL’s chair swivels around to reveal she’s the mastermind behind the machine uprising, she’s propped up by three appropriate books. There’s The Master Algorithm: How the Quest for the Ultimate Learning Machine Will Remake Our World, by Pedro Domingos; Sun Tzu’s The Art of War; and The Singularity Is Near, by Ray Kurzweil.

Katie’s plan has the Mitchells dressing up in disguise as robots. The glossy white panels that make up the robots’ bodies aren’t too dissimilar from Stormtroopers’ armor, so her plan is reminiscent of Luke and Han’s rescue operation in the first Star Wars.

Katie’s plan explicitly references the Mad Max franchise, as she suggests that the Mitchells dive headfirst into the apocalypse and become robot-killing Road Warriors.

Katie objects to her dad’s plan to just stay put rather than attempt to go stop the machine uprising by offering a Ghostbusters analogy: “What if the Ghostbusters said, ‘You know what? Let’s hide underground. Eat some dog. Let the ghosts destroy New York.’”

As the Mitchells pull into the Mall of the Globe, Katie notes that it’s just like Dawn of the Dead, George A. Romero’s Night of the Living Dead follow-up. The 1978 movie is a classic zombie flick and a biting take on American consumer culture. (Rick rhetorically asks, “How’d that movie end?” Spoiler alert: Pretty much all the humans die.)

The Mitchells vs. the Machines saw Uncut Gems’ bedazzled Furby and said, “Hold my beer.” Furby, a toy that was extremely — extremely — popular in the late ’90s, gets the Gremlins treatment in the new movie, finally embracing its role as the harbinger of death it was always meant to be.

Katie’s video of the Mitchells exiting the mall like badasses as it burns behind them is scored to Japanese musician Tomoyasu Hotei’s “Battle Without Honor or Humanity,” a song that’s probably best known for appearing in Quentin Tarantino’s Kill Bill: Volume 1. (This is not the last Kill Bill music cue in The Mitchells vs. the Machines.)

After the Mitchells concoct their plan to take down PAL (and agree that Monchi will be “a little gentleman” at the celebratory dinner afterward), Katie declares, “Mitchells, engage!,” and the scene transitions with a similar graphic and sound effect as was seen in the 1966 Batman TV show.

The second Kill Bill musical cue comes when Linda enters Beast Mode when the upgraded robots capture Aaron. A siren blares, as it did in Kill Bill whenever the Bride saw somebody on her kill list. The music originally comes from Quincy Jones’s theme to the 1967 TV show Ironside.

The end credits show the real-life versions of many of the cast and crew members, including director Mike Rianda and his family, the inspiration for the Mitchells themselves.

In addition to the main cast, there are some fun voice cameos in The Mitchells vs. the Machines you might have missed that the credits reveal. Chrissy Teigen and John Legend play the Mitchells’ perfect neighbors, Hailey and Jim Posey, which tracks. Charlyne Yi plays their daughter, Abby.

YouTuber Elle Mills plays Hanna, one of Katie’s college friends. Another classmate, Dirk, is voiced by Alex Hirsch, the creator of the cartoon Gravity Falls. Both Rianda and his co-director, Jeff Rowe, worked on that series. (Rowe makes a small cameo as the guy who really loves fun when the robots first attack the Mitchells.)

Finally, internet-famous dog Doug the Pug voices Monchi. Most of the time in animated movies, people voice animals, so it’s kind of a big deal that Doug the Pug is so accurately representing his species.

Dave Bautista Says Being Cast in Knives Out 2 is “Terrifying,” But Also Validating – /FILM

Andrew Garfield says if hes ever desperate for money he will let people pay him to whisper his iconic Social Network line in their ear – Yahoo! Voices