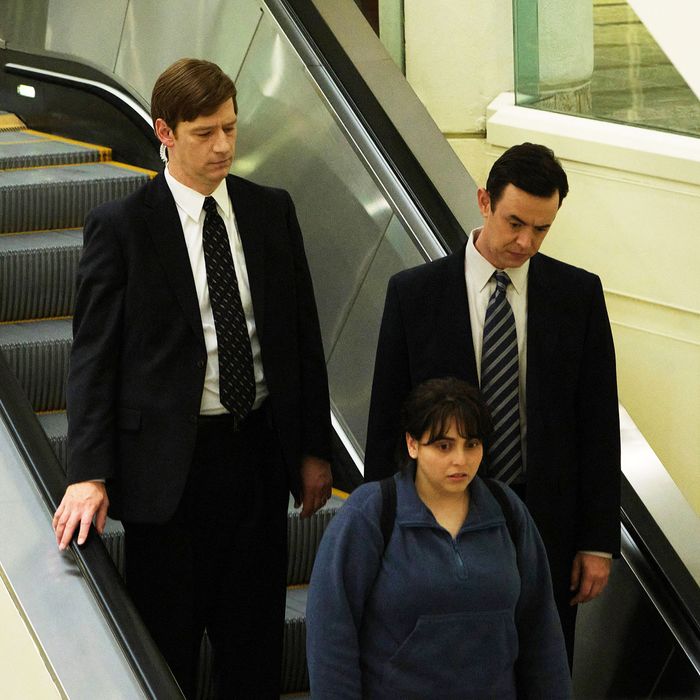 Start your timers, folks. Janet Reno has approved ensnaring Monica Lewinsky in Ken Starr’s extensive spiderweb, and the special prosecutor has precisely one day to flip her. Tomorrow morning, Bill Clinton testifies in the Paula Jones suit. After that, Newsweek will run a story about the president and the intern. It’s five minutes to now-or-never o’clock, but Jackie Bennett, Starr’s pit bull, isn’t worried about Operation Prom Night. Monica’s a young girl; she’ll cooperate quickly. As for the mission ID? “Half-hour with a girl in a hotel room,” Mike Emmick, shamefaced by the prurience, explains to his OJ-swilling boss.

From the get-go, this sting feels shady. First of all, why are our tax dollars paying for suites at the Ritz-Carlton when there’s a DoubleTree two blocks away? Before the FBI picks up Monica, the Starr team formulates an explicit strategy to keep her from calling Frank Carter, the lawyer Vernon Jordan arranged, thereby tipping off the White House. They need Monica’s cooperation, yes, but it’s worth a lot less if Bill Clinton doesn’t lie under oath. At just about the moment the team should be synchronizing watches, someone announces that Linda Tripp is running ten minutes late. It’s a credit to Sarah Paulson’s portrayal that it is so easy to imagine Linda running ten minutes late to a sting. I’m sure she left ten minutes late so that she could call and say she was running ten minutes late. She has set in motion an elaborate domino fall that ends in the impeachment of the president of the United States, but the idea of a dozen suits standing around, thinking, Where is Linda? We can’t do this without Linda!, is irresistible to her. Long may she relish this brief summer of her own significance.

Once the Feds pluck Monica from the food court, Mike informs her that she has committed 28 years in a federal prison’s worth of perjury and perjury-related felonies. Monica cries, which is, I think, an appropriate reaction. Sitting on an overstuffed settee, she stares down at a glass of water like she is trying to imagine drowning in it. Mike is our Good Cop: We know you lied about your affair with the president, he tells her, but we’re not mad at you; we’re mad at the powerful men who made you lie. We want to help you! Come with us to our ugly office, tell us everything you know, and then pick up our phone and entrap your friends. It’ll only take a minute! Also, we’ve got recordings of you, so don’t play dumb.

When it finally dawns on Monica how this all came crashing down around her, she gets ferocious. Someone attempts to hand her a trash can to be sick, but Monica slaps it away. This is my house, and I did not invite you, somewhere bellows the NBA Jam announcer. Monica screams through the hotel doors, “LINDA, WHAT DID YOU DO?” If this is prom night, the president’s girlfriend is Carrie.

Does it not feel like a gigantic flaw in the op that Monica can’t simply make the bugged phone calls to Betty & Co. from the Ritz? This plan has too many phases, and Mike has fallen at the first hurdle: Monica won’t agree to cooperate. Starr sends in Jackie to take a second pass. The Bad Cop reiterates that she shouldn’t call her lawyer because Frank Carter is a co-conspirator (what?). Jackie allows Monica to call her mom, who has been paging, but tasks a goon with hovering his finger over the switch hook. When she asks to talk with her mom privately, Jackie threatens to charge Marcia too. This is a mistake. If we know anything about Monica, it’s that she doesn’t accept the word no. She might be young, but she’s not a dipshit. She is, for example, savvy enough to convert an affair with the president into a private-sector job. “You gonna arrest me if I walk out of the room?” she asks.

When Monica calls Marcia from a mall pay phone, Marcia convinces her not to warn Bill. In fact, Monica should do nothing at all until she gets there from NYC at 8 p.m. Something of a plan is finally coming together. Monica calls her dad, Dr. Bernie, who seems nice, and he calls his malpractice lawyer, Bill Ginsburg, who rushes over. Ginsburg’s first piece of counsel is to order Bernie a tequila shot. I don’t know about you guys, but I think this will probably be fine.

Meanwhile, Mike and Jackie are infighting. This isn’t a heist movie, so I’m not too concerned the crew’s hothead will shoot the witness, but Monica is sensing the tension. The Good Cop orders silver-plated coffee service for the long wait, which costs, I shit you not, $16 a cup in 2021. (Yes, yes, I did call the Pentagon City Ritz-Carlton and wait through multiple line transfers to secure that information for you.) Next time she asks, noticing it’s already 4:45 p.m. on a Friday, Mike tells Monica she can absolutely call her lawyer. When Frank doesn’t answer, he even offers her a public defender.

Jacked up on afternoon caffeine, Monica feels stir-crazy, so they do what a self-respecting ’90s girl does when she’s bored: hit the mall. Their first stop is Crate & Barrel, except there is no Crate & Barrel at Pentagon City. It’s just not that kind of mall. If you need home goods at Pentagon City, I’d have to send you to Macy’s. Monica explains to Mike the mechanics of a wine decanter, and you’re telling me this 24-year-old knows to decant her wine and that decanting wine is a bougie affectation, but she doesn’t think to call her lawyer twice? Maybe she is just deeply ambivalent about bringing more people into what’s happening. When she glimpses a news segment about Bill’s deposition, she puts the timeline together and sneaks away to call Betty, who doesn’t pick up. Monica can still stop this somehow, she thinks, or at least control how big it gets.

She seems more worried about her dad finding out and her grandma’s disappointment than the possibility of prison. “I’ll never have kids,” she tells Mike when they stop for TGI Fridays (also not in the mall). “No one’s ever going to marry me.” Monica may wrongly believe she’s likely to go to prison, but she’s otherwise more prescient than the people around her. No matter if she cooperates or not, this moment is life-upending. When her mom finally arrives, Marcia tells her to prioritize her own future and cooperate, but maybe that’s shortsighted. If Monica calls Betty, and Betty calls Bill, his lawyers cancel the deposition. There’s no perjury. No impeachment. Tipping off the White House is how Monica saves herself.

Instead, Marcia asks to see Monica’s immunity deal in writing, and, honestly, the FBI would have been better off letting Monica call Frank Carter because Marcia is a tough advocate. When they refuse, she insists on calling Dr. Bernie so that there’s another witness to the immunity offer. The way Monica whispers “Hi, Daddy” into the receiver is the most human moment of the series so far. Sitting next to Bernie, of course, is Ginsburg. Eleven hours later, Monica has a profane, if underqualified lawyer, and the lawyer tells her to get up and leave. She’s not under arrest. If anything, this is unlawful detention. Back at the Watergate apartment complex, Monica considers some pills she finds in the bathroom vanity. She examines a pair of scissors. She sobs painfully in the shower, and her mom sobs too, listening in. Monica doesn’t warn Bill about what’s coming nor does she turn on him. Operation Prom Night is a bust. They held Monica for half a day — 20 times longer than the half-hour they said they needed — and she never answered their questions.

As we all know, Monica’s resolve can’t keep the dominoes from falling. Elsewhere in Washington, Ann Coulter and the merry elves settle in with half a dozen bottles of Champagne and the Tripp tapes. “This is a coup d’état, and we’re the coup,” she calls brightly. This is probably what most coups look like, orchestrated almost invisibly by people with little skin in the game. They’re ruining Monica’s life in the hopes that the fallout will be enough to ruin the lives of their chosen enemies. If the tapes are too boring to take down the Clintons, they’ll just try again.

It’s a pathetic scene but not more pathetic than Linda Tripp’s face when the FBI dismisses her. With Monica in the room, she is no longer needed. In fact, she was barely needed. Her moment in the sun is over. Smoke in your Laura Ashley living room, be nasty to your kid. Tell Paula Jones’s lawyers your only friend’s deepest secrets. Convince yourself you’re saving Monica from a predator. Convince yourself you’re saving the country. Slather yourself with the Body Shop moisturizer you bought on the same afternoon you betrayed the only person who trusts you because the Body Shop actually is a Pentagon City store. Inhale the scent of British Rose because you’re definitely a British Rose person. Pause for long enough and you might even catch a whiff of what you’ve done here today.

• Ken Starr’s team really did keep Monica at the Ritz for half a day, though Starr has been very clear that the rooms were pleasant and “commodious.”

• There really were a team of “elves,” which included Ann Coulter and George Conway, though he was based in NYC at the time. “There are lots of us busy elves working away in Santa’s workshop,” Coulter told Newsweek.

Keep up with all the drama of your favorite shows!