When Amitabh Bachchan’s Vijay said these lines in Prakash Mehra’s Zanjeer, the audience saw the first glimpse of the character who would eventually be known as the ‘angry young man’. One film after another, Amitabh Bachchan became synonymous with his on-screen avatar of Vijay, and the audience cheered loudly for him. Even though he wasn’t the ‘traditional hero’ who knew right from wrong, he was a hero for the masses because he wasn’t apologetic and channelled their anger.

Unlike many stars before him like Rajesh Khanna, Dev Anand, Dilip Kumar, Amitabh’s Vijay wasn’t the romantic star but what he stood up for had a wider connection with the audience of that time. Vijay had certain angst that struck a chord with the masses and thus, the ‘angry young man’ became a phenomenon.

Over the years, the ‘angry young man’ has been analysed by scholars all across the world. The idea of the character came from a common man whose ideal picture of a morally upright life was starting to change because he had realised that the system was stacked against him. To finally take control of his life, he had to ignore law and order and walk a non-traditional path. His illusion of a happy, just society was starting to crumble and the anger  was reflected in the early 1970s cinema. Amitabh portrayed different shades of this character in films like Deewar, Trishul, Don, Muqaddar Ka Sikander, Kaala Patthar, Laawaris, Shakti, among a few others.

In a conversation with Syed Firdaus Ashraf in 1998, director Prakash Mehra had shared that when he selected Amitabh for Zanjeer, the actor was struggling with one flop after another. Mehra was the first director who brought ‘angry young man’ to the screen but the director revealed that this particular term for the character description was not given by writers Salim-Javed, it was a name that came from the press. “The name, ‘angry young man’ was given by the press,” he said. Unlike the later reflection of the character, Zanjeer’s Vijay is in a cop’s uniform but his frustration with the system is giving him sleepless nights. Since Mehra was the first person who brought this character to life, without any reference whatsoever, he explained the character’s anger. “If you see the film, you will find out that it is the inner conflict of a person who is suffocating and wants to fight against the system. And he cannot do it alone,” he told Ashraf. 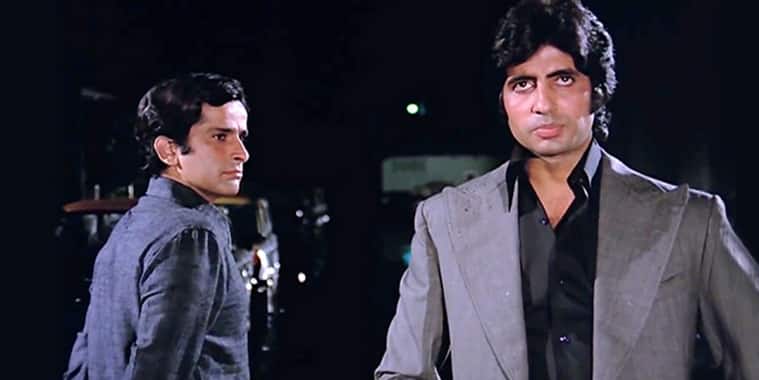 Deewar gave Amitabh Bachchan the kind of success that catapulted him into stardom.

Most of the films of Amitabh’s ‘angry young man’ era were written by the writing duo of Salim-Javed (Salim Khan and Javed Akhtar). And while much has been written about the socio-economic makeup of Vijay, the writers have often said that at the time, they were not consciously imbibing those characteristics into their work but it certainly affected their mental makeup. At a session during the Jaipur Literature Festival in 2017, Javed spoke about the unstable political era of the 1970s and how it affected the common man’s psyche. “It was a politically unstable time, unconstitutional forces were appearing. Verdicts of high courts were being set aside. And that was the pre-emergency time where perhaps for the first time, we realised that the socialistic pattern of life (that we thought) will bring happiness, joy, prosperity (that) is on the next page of the calendar… nothing happened. So those dreams were shattered and somewhere an average Indian was losing faith in law and order and establishment. So it is no surprise that an angry young man came, who was so direct, so blunt,” he shared.

And Amitabh was the actor who became the face of that emotion of the masses. Javed added that Birju of Mother India (played by Sunil Dutt) and Gunga of Gunga Jumna (played by Dilip Kumar) were probably the earlier versions of the character that were perhaps not as relatable on a wide scale, but by the time the 1970s rolled around, the feeling of anger was starting to spread. 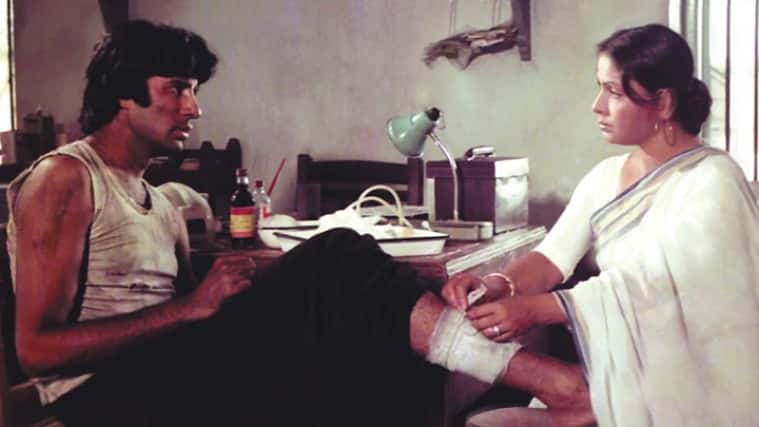 Kaala Patthar’s Vijay was brooding thinking about his failure on the sea.

The angst of the common man was translated differently in each of these portrayals by Amitabh. While the man in Deewar was angry because his father left the family and abandoned him with a tattoo that said “Mera Baap Chor Hai,” the man from Kaala Patthar was still overcoming the trauma of the ship he left behind. His anger in Trishul arose from the fact that his father left his pregnant mother for a rich woman, and they had to struggle for morsels. And his Vijay in Don became a victim of circumstances after his life is threatened, while he has to look after two young kids.

The effect of Vijay was such that a man who could have been seen as a villain in previous decades, was now the hero figure. Many of these films were multi-starrers and Vijay was often pitched against a traditional hero-figure, which made him even more desirable for the audience.

Salim-Javed introduced the angry young man with Zanjeer but as their and Amitabh’s journey proceeded, it became a symbiotic relationship. With Deewar, Sholay, Don, Kaala Patthar, they moved on to create many more masterpieces together. In fact, Amitabh wasn’t even the first choice for Deewar, it was Rajesh Khanna, who lost the role because Salim-Javed convinced director Yash Chopra that no one but Amitabh would fit the bill. In an interview with Lata Khubchandani in 2000, Salim Khan shared, “Amitabh is one of the finest actors that ever came on the Hindi film scene.  His personality inspired the kind of films we wrote for him. We kept his personality, his talent, and his acting ability in mind and wrote films around these criteria. These roles were not interchangeable. They were meant for him, written for him.” To his credit, Amitabh has often said that Salim-Javed’s writing was such that any actor who would have landed in Vijay’s shoes, would have become a star but in hindsight, one can say that Amitabh was destined to do these roles. 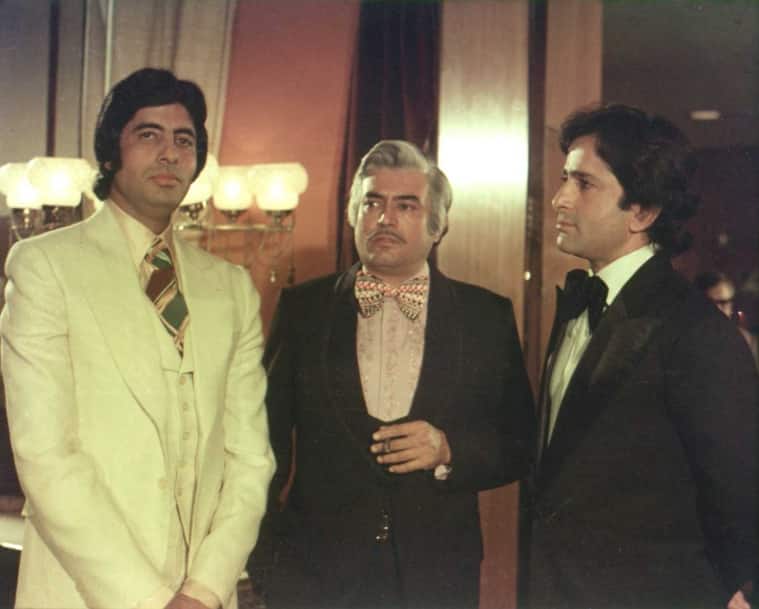 Trishul’s Vijay wants vengeance for his mother who was left alone by Sanjeev Kumar’s RK Gupta.

Amitabh’s turn with the angry young man became the ‘it factor’ of the day, and soon other filmmakers and writers also brought out shades of this character in films like – Muqaddar Ka Sikandar, Suhaag, Laawaris among others. Late actor-writer Kader Khan wrote dialogues for many of these Manmohan Desai and Prakash Mehra films. In a chat with Lata Khubchandani for Rediff, Khan shared that Amitabh’s charisma had a lot to do with his voice and writers made sure that they utilised it while writing for him. “Amitabh has this innate talent for speech, but he also trained himself. He is an actor who has put in effort in all aspects of acting. The potential existed in him and he refined it.  Most people become complacent, but not Amitabh. He works hard and is sincere to his profession,” he said.

Bachchan himself explained the popularity and immediate connect of his roles, “In the minds and in the hearts of the youth of India there was some kind of suppressed anger, something that they desired and which was not being said and not coming out. And perhaps in these roles the way these were written and perhaps the way they were performed they found a hidden release for to say. There was a tremendous identification by the people, by the youth, with the characters that I was doing. And because of this identification, they became very popular.”

As the 1980s proceeded, the era of angry young man started declining and soon, it came to an end. As Javed Akhtar had said at the Lit Fest, “People cannot remain angry for a long time.” The persona of ‘angry young man’ did not disappear from cinema for a while and we still see splashes of it in mainstream films but the imagery of this character has always been associated with Amitabh Bachchan and will continue to remain a part of his legacy.