After an eventful week for the social media giant that saw a whistleblower share shocking revelations about the company’s potentially negative impact on national security as well as an outage that took down its sites for an entire day, hosts Colin Jost and Michael Che were ready to pounce with some sharp jokes at the company’s expense.

After being the subject of the show’s cold open, Jost began the segment with a dig at the Facebook CEO, saying: “This week we found out that sometimes a guy in a hoodie actually can be dangerous.”

The comedian, who many may not know graduated from Harvard University in 2004, noted that he was at the school around the same time that Zuckerberg was there infamously creating Facebook.

“I feel terrible,” he said. “Sometimes I wish I had a time machine so I could go back to college and find Mark and say, ‘hey man!… Can I be part of your company?” 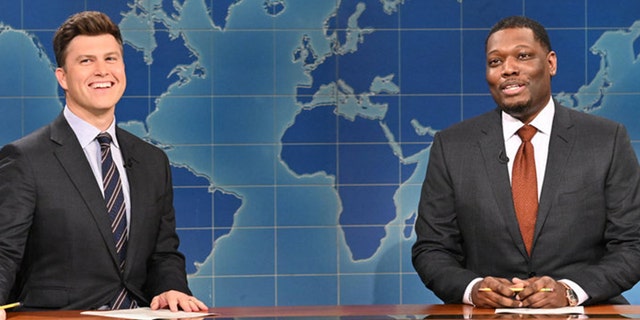 ‘Saturday Night Live’ took on Facebook in its ‘Weekend Update’ segment.
(Will Heath/NBC)

Jost also commented on a recent report from The Wall Street Journal that states using Instagram can increase the likelihood that a person will have body image problems.

“Which explains their rival’s new slogan, ‘TikTok, bring your fat a– over here,” he joked.

“This week, Instagram was down for an entire day, forcing many Instagram addicts to fill their time with Twitter, TikTok or hosting ‘SNL,’” Che said as a picture of the week’s host, Kim Kardashian, appeared on the screen.

Kardashian, in addition to being one of the most popular reality TV stars, she and her family have some of the most followed accounts on Instagram where they have each created massive business empires in cosmetics, clothing and more.

Kim Kardashian was not shy about lambasting herself and her family during her time on the show. In her opening monologue, the 40-year-old star made hay out of her estranged husband Kanye West’s failed bid for president in 2020 as well as her father Caitlyn Jenner’s failed run for governor of California. She also impersonated her sister, Kourtney, for a sketch that put the entire family on trial in a mock-up of “The People’s Court.” 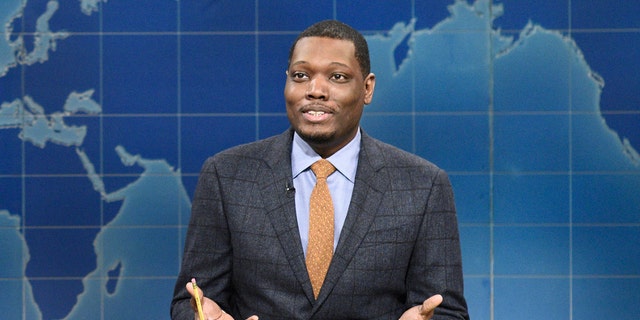 Michael Che told a joke that recieved groans in the most recent ‘Weekend Update.’
(Will Heath/NBC/NBCU Photo Bank via Getty Images)

While the self-aware dig at Kim was one of the more awkward moments from Saturday’s “Weekend Update,” Che received some serious groans from the crowd over a joke about the New York Police Department later in the segment when he implied they were happy about a statue of George Floyd was defaced recently.

“Police are searching for the suspect and are planning to serve him with a job application,” he said, shocking some in the audience.

When Harry – and Meghan – met the U.N. chief in New York – Reuters