Some people really love their jobs.

It’s been 50 years since Disney World in Florida first opened. During the time, a lot has changed as old rides were replaced and new characters were brought in. Throughout the years, however, some things have remained constant. 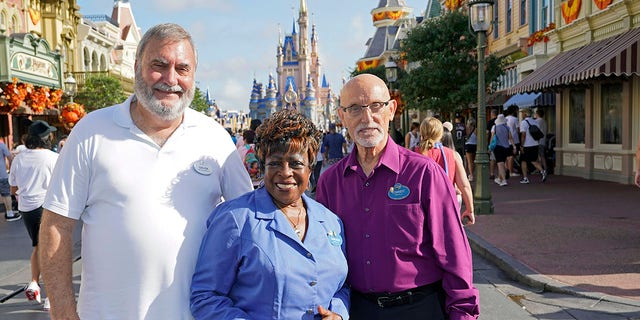 Chuck Milam, Earliene Anderson and Forrest Bahruth have been working at Disney World since the park first opened 50 years ago.
(AP Photo/John Raoux)

Chuck Milam, George Kalogridis and Earline Anderson have been working at the park since its opening day. They recently spoke with the Associated Press about their time at one of the most popular tourist attractions in the world.

Anderson, who works in merchandising at a hotel in the Magic Kingdom, said, “Disney has been my love, and it still is. I love Disney.”

‘A TRUE GENTLEMAN:’ 4-YEAR-OLD TIPPING HIS HAT TO DISNEY PRINCESSES GETS LOVE FROM MILLIONS

Kalogridis, who started at the park after graduating high school, worked his way up to be named president of Disney World and Disneyland in California.

Forrest Bahruth was initially hired as a show director for the park in January of 1971, making him another member of the 50-year club. Over the past five decades, he says he’s had the opportunity to help open other Disney theme parks, although he still returns to Disney World.

“There are people all over the world who get up to go work. They’re unhappy about it. They don’t really like their jobs,” Bahruth said. “As you can tell from us, there’s an enthusiasm. We are privileged to be at a place where we love what we do.”

While it’s been a long time, Milam says he still remembers the opening day. A moment that stood to him, in particular, was a photo of all the workers that was taken near Cinderella’s castle.

Milam explained, “They brought all the characters up, staged them first, and then they tried to keep all the different workers together based on the color of their costumes. If you were from Fantasyland and in yellow, you would go over there.”

Laura Prepon reveals she left Scientology: Its no longer part of my life – Yahoo Entertainment