Under ordinary circumstances, they probably would have thought better of entering a house with a blood-spattered welcome mat. But the circumstances in which Connie and Virgil found themselves in Sunday’s episode of The Walking Dead were anything but ordinary. As a result, they wound up being chased around by a group that was arguably even more horrifying than walkers. Who — or what — were they? Read on…

‘NOT ALONE’ | As “On the Inside” began, while Kelly, Rosita, Carol and Magna (not Magda, as autocorrect likes to insist!) were searching for Connie, she and Virgil were taking refuge in a home that could’ve belonged to The X-Files’ Peacock family. When not dealing with the post-traumatic stress of her ordeal with Alpha’s horde, Kelly’s sister stared down present-traumatic stress in the form of ack! Eyes gazing back at her from behind a medicine cabinet! Soon enough, she and Virgil discovered that they’d actually been herded to the house by its occupants, a group of feral humans (who were considerate enough to continue wearing Underoos so as not to require the pixellation of their privates). “I’ve never seen people so far gone,” marveled Virgil, who tried to insist that Connie take his knife and keep going whether or not he was able to accompany her. He had to pass on the chance that Michonne had given him. Pass it on to someone other than her, Connie basically replied. If they made it out of there, they’d make it out together.

Mind you, that was a big “if.” When next Connie and Virgil were attacked by the would-be Termians (in that they seemed intent on, ahem, having their houseguests for dinner), he was brutally stabbed in the back — not once, not twice, but three times! — by a feral woman. (Gotta think that would have killed any normal person, but Walking Dead characters seem to have the magical recuperative powers of, say, a Slayer.) By and by, Connie was able to help Virgil into the hall, where she covered herself with walker guts and acted as a human shield for him when she threw open the front door to invite in a pack of walkers to dispatch their attackers. Outside, she was about to face off with the remaining feral folk when bam! Bam! They started falling. It was Kelly with her trusty slingshot. Finally, the sisters were reunited! Now then, should someone check on Virgil, who was just kinda lying there… bleeding… ? 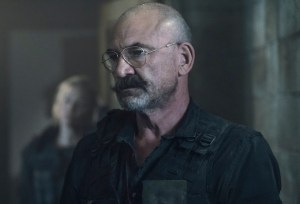 ‘YOU’RE EITHER WITH US, OR YOU’RE NOT’ | Meanwhile, in Meridian, Pope tested Daryl by having him replace Carver as Frost’s torturer. “Well, are we just gonna stand here staring at each other dreamily, or we gonna get to it?” asked Frost. (Don’t get attached, salty and appealing as he is.) After Daryl went so far as to cut off one of Frost’s fingers, he spat out a description of a home, which was apparently enough for the Reapers to launch a search for Maggie & Co. even without GPS. Along the way, two things became abundantly clear: Carver is kinda sweet on Leah, and he hates Daryl the way Beta hated Negan. But I digress… When the Reapers neared their destination, Daryl warned Maggie of their imminent arrival by setting a phone (electric?) wire swinging in the street. So by the time they actually entered the home in which Maggie, Negan, Gabriel and Elijah were hiding, our group had managed to sneak into the basement (the entrance to which was, at least mostly, covered by a rug).

Cleverly, Daryl suggested that the crew the Reapers were pursuing had run in such a way that he was able to tip off an eavesdropping Maggie & Co. to key intel about the villains. Never having met Chatty Cathy Negan, Carver blew his stack over Daryl’s incessant yapping. “We both know who he really is deep down,” Carver told Leah. (Do we, though? Some ex who betrayed her?) After Carver argued that Daryl wasn’t really a Reaper, our protagonist beautifully finessed the scene. Carver was right, Daryl said. He didn’t care about any of them but Leah. He’d failed before at their relationship, but “maybe I’d be better at it this time if you let me.” (Cut to Leah’s heart all aflutter.) When the group returned to Meridian, Maggie & Co. having slipped away while they were yakking, Pope revealed that “after you left, I continued the discussion with our guest,” Frost — now dead and walkerfied, having told the madman “all he needed” to know about Daryl. Pope didn’t deep-fry Daryl’s face on the spot, but the way he walked off chuckling with Carver, it certainly seemed like his suspicions about Leah’s ex had been confirmed.

So, your thoughts about “On the Inside”? Connie and Kelly’s reunion? The deep s—t in which Daryl has landed? Hit the comments.