Camila Cabello soaked up some sun while enjoying a beach day in Miami, Fla.

The “Cinderella” star, 24, flaunted her curves in a yellow thong bikini as she enjoyed the waves and then later relaxed on a beach chair.

Cabello has been busy over the past few weeks — first performing “Don’t Go Yet” at the VMAs and then attending the Met Gala with boyfriend Shawn Mendes.

The singer/actress wore a purple Michael Kors gown to the fashion event. Her look was inspired by Cher. She told Vogue the dress was giving her “purple, sparkles, and disco glam” vibes.

Cabello has previously opened up on social media about how she’s battled negative feelings about her body after photos of her running in a sports bra surfaced online. 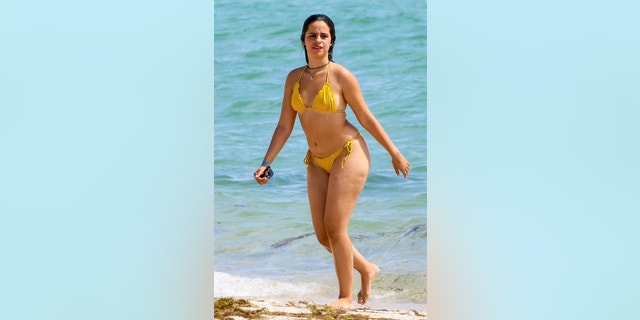 Camila Cabello was pictured back in Miami, Fla., while taking a few days off from her busy schedule.
(Backgrid )

“I was just running in the park minding my own business trying to be fit, trying to keep it healthy,” Cabello said in a video. “And I am wearing a top that shows my belly.”

“And I wasn’t tucking it in, because I was running and existing like a normal person that doesn’t tuck it in all the time,” the pop singer continued. “And I was like, ‘Damn.’ But then I reminded myself being at war with your body is so last season.”

“I am grateful for this body that lets me do what I need to do,” Cabello concluded. “We are real women with curves and cellulite and stretch marks and fat. And we gotta own that, baby.” 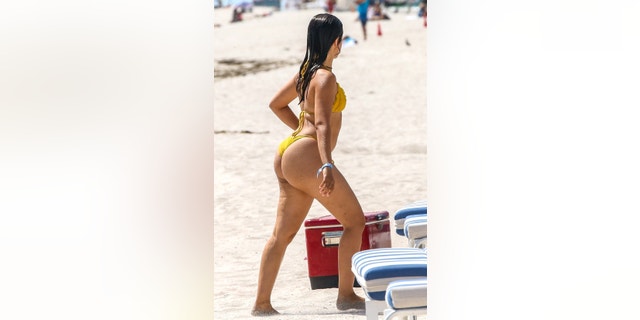 Cabello was snapped while going for a dip and displaying her bikini body in a yellow two-piece.
(Backgrid)

That wasn’t the first occasion the pop singer has spoken up about body-shaming. Back in 2019, she said on her Instagram Story according to People magazine, “I haven’t gone on social media AT ALL with the conscious intention of avoiding things that hurt my feelings, but for a second I forgot while trying to find a pic to post about it being Havana’s 2 year anniversary and my eyes accidentally ran over a head line [sic] of people ‘body shaming me.”

“My cellulite! oh no! I didn’t suck in my stomach!” she continued. “But then I was like…of course there are bad pictures, of course, there are bad angles.”