By Brian Marks For Dailymail.com

She confirmed she was pregnant with her second child earlier this month.

And Kylie Jenner seemed to admire her changing figure on Monday when she posted a short clip of herself to her Instagram Stories.

The 24-year-old Keeping Up With The Kardashians star could be seen caressing her baby bump in a mirror selfie video taken from one of her dressing rooms. 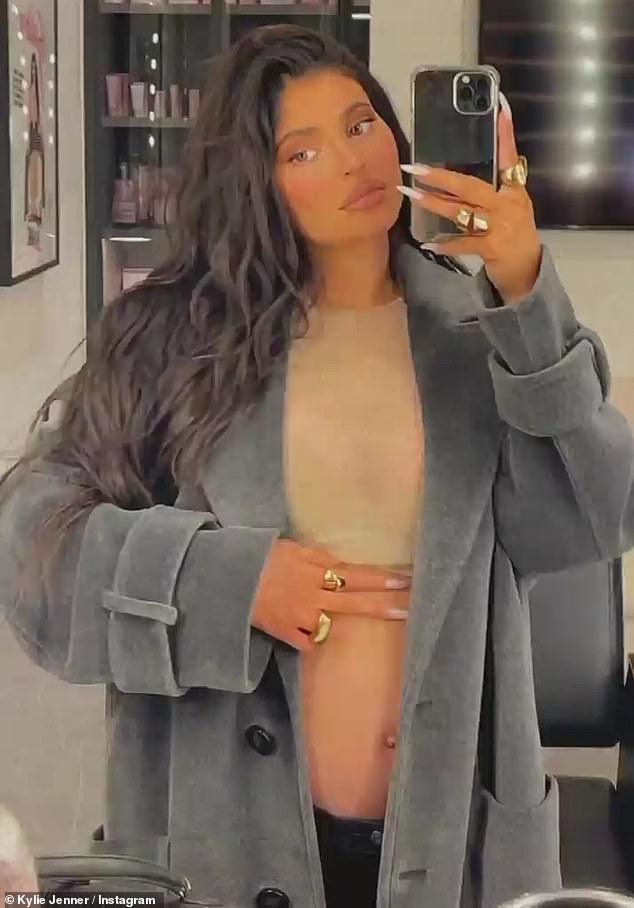 Admiring herself: Kylie Jenner, 24, delicately caressed her baby bump in a short video posted to her Insta Stories on Monday

Kylie looked like she was ready for fall weather with a stately gray overcoat that she wore open to reveal her stomach.

She appeared to also have on dark jeans and cream-colored crop top that didn’t do anything to cover her midriff.

The reality star sported pointy white nails and thick gold rings on her fingers, which she rested gently on her bump. 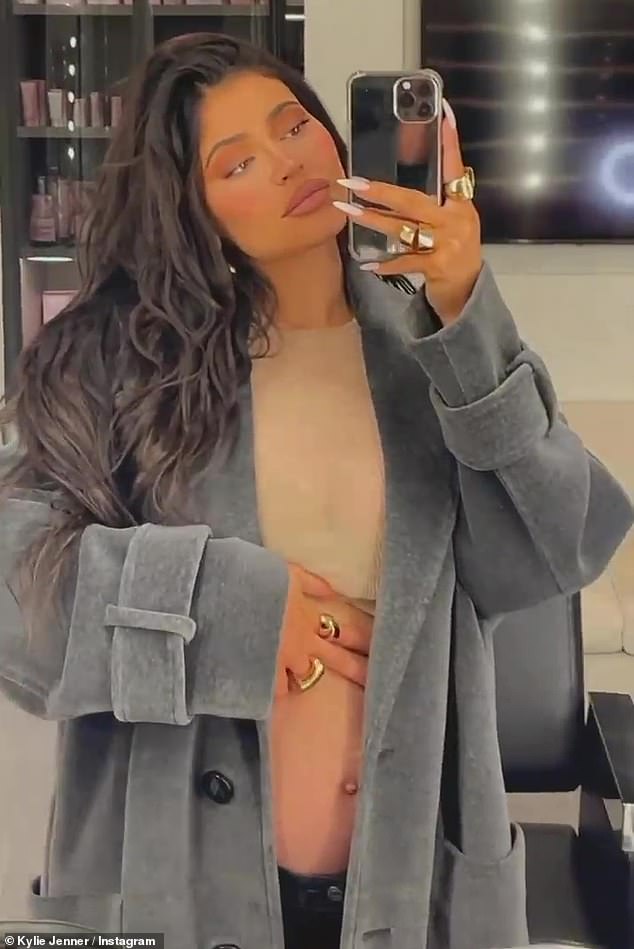 Elegant: Kylie looked like she was ready for fall weather with a stately gray overcoat that she wore open to reveal her stomach 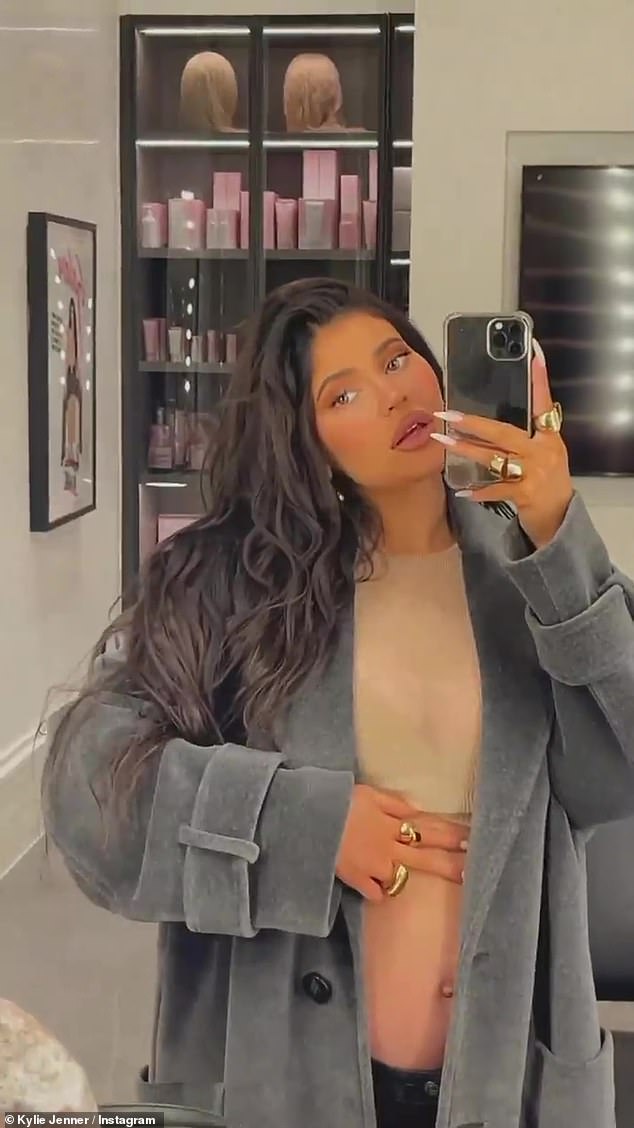 Delicate: She ran two fingers over the top of her stomach and wore a cream-colored crop top

She had a makeup chair just behind her and displays filled with cosmetics in the background.

Kylie seems to have delighted in showing off her baby bump as her pregnancy progresses, like she didn’t in a recent car photo posted to her Insta Stories on Sunday.

The social media star sat behind the wheel and turned her camera down to show her stomach.

‘belly’s getting big,’ she captioned the snap, adding two hearts. 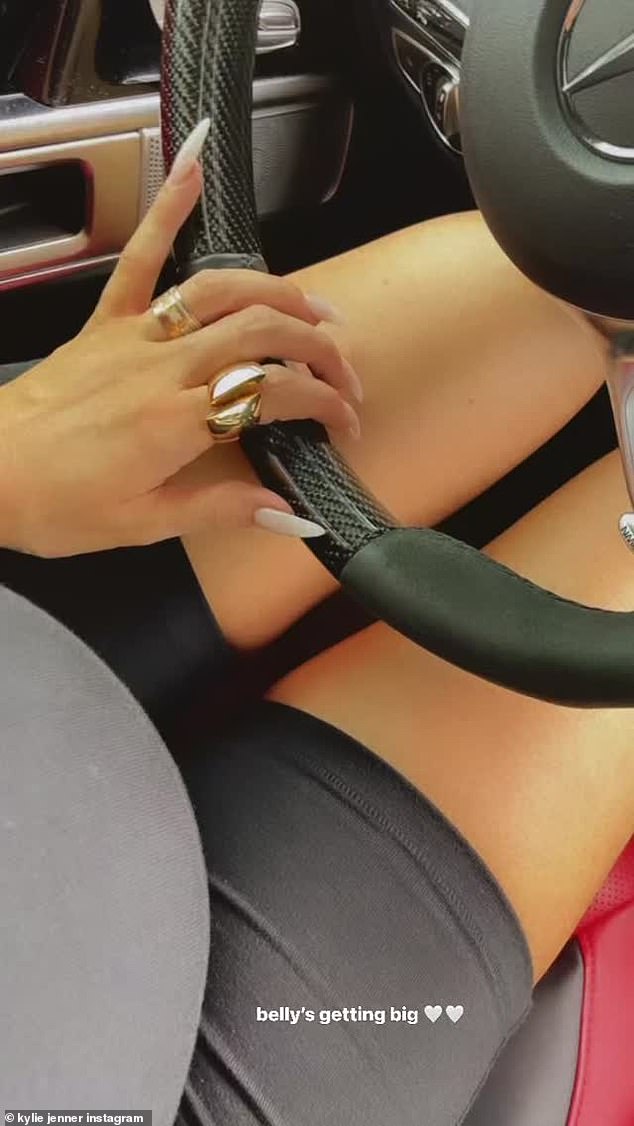 ‘belly’s getting big’: The day before, the youngest of the Kardashian-Jenner clan — who is soon to welcome her second child with rapper Travis Scott — showed off her growing baby bump

Kylie was spotted earlier on Sunday during a family trip to a zoo in Houston, Texas, with her partner Travis Scott — who hails from Houston — and their three-year-old daughter Stormi Webster.

The cosmetics mogul has been taking things easy since she opted to skip out on the Met Gala a week earlier.

At the time, a source told E! Online: ‘She did a lot this past weekend and pushed it.

‘Kylie has been going back and forth for the last two months on if she wanted to attend or not and decided she doesn’t really need to go.’

They added: ‘Kylie is focused on her pregnancy right now and just wants to take it easy.’

A second source claimed she claimed she wanted to reveal her pregnancy and debut her baby bump at the Met Gala, but it ‘didn’t work out the way she hoped.’ 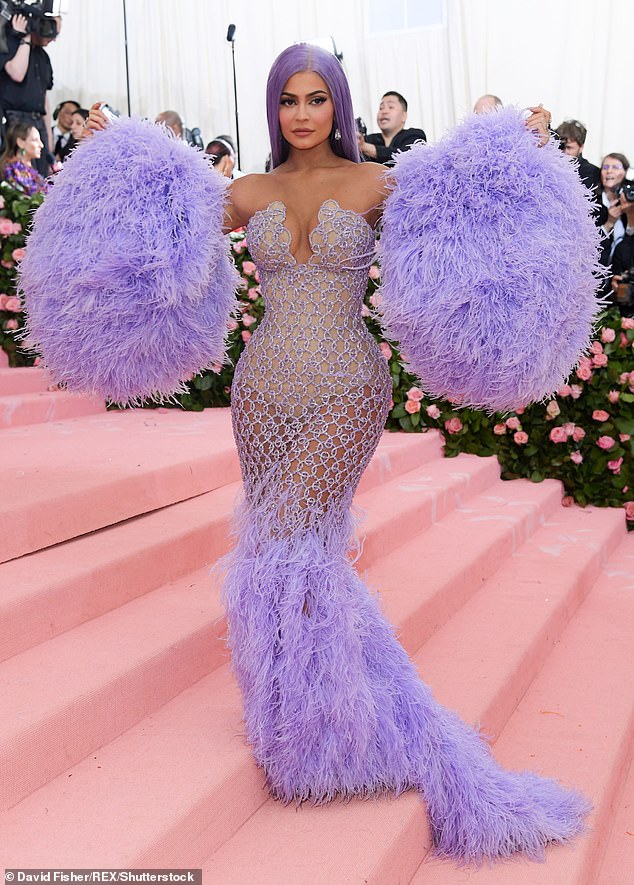 MIA: Kylie skipped out on the Met Gala last week, which led some fans to wonder on social media if she was unvaccinated, as all attendees needed to be fully vaccinated; seen in 2019

Her decision to skip the event came as a surprise, as Kylie had been picture at several New York Fashion Week events just days earlier.

Attendees of the Met Gala were required to be fully vaccinated against the novel coronavirus, which led some fans to wonder on social media if Kylie was unvaccinated.

So far, she doesn’t appear to have publicly shared her vaccination status.

Her decision to skip out on the event was reportedly shortly after Nicki Minaj shared that she wouldn’t be attending the Met Gala because she was unvaccinated.

The rapper was the brunt of merciless ribbing on Twitter after she claimed a cousin’s friend in Trinidad had had to cancel his wedding because he became ‘impotent’ due to ‘swollen’ testicles, which health officials in Trinidad later debunked. 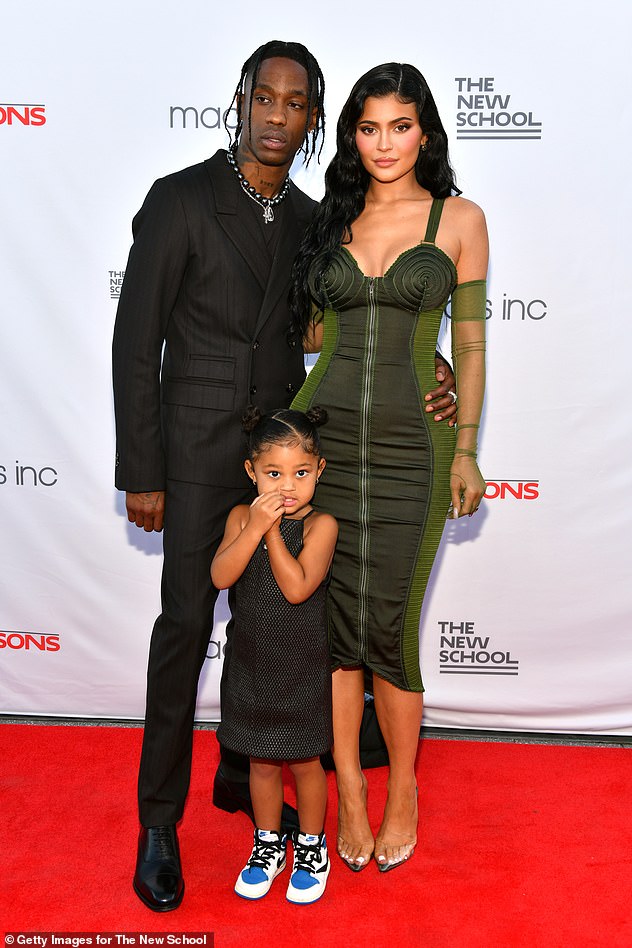 Baby on the way: Jenner is expecting her second child with her boyfriend Travis Scott, 30; Pictured in June 2021 with Stormi, three