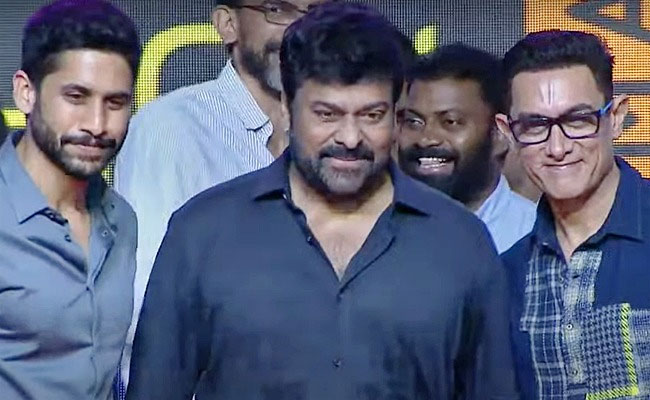 Aamir Khan became a surprise guest in the pre release event of the film “Love Story”. He came along with Naga Chaitanya to the event and praised him a lot in the speech. Many started reading between the lines of his speech.

Aamir Khan spoke, “I asked Naga Chaitanya if I can be part of the event. That’s the reason the organizers had to invite me forcibly. I came here to say something important.

We both have been working together for a film. I had some experiences with Naga Chaitanya that are so special that I wanted to share with his parents.

I took his father’s number and his mother’s number too. But I wanted to tell something to all of his fans as well. So I came here. I felt so happy working with this man, who is not only an actor and a creator but he is such a kind of man who touches the heart of anyone with his nature.

I wanted to say to his parents that the brought up given to him is so good that he is in front of us like this. He made me feel like I know him from many years. Me and my team miss him everyday”.

It is known that Naga Chaitanya and Samantha are getting separated shortly according to the industry talk and as per the information from the reliable sources. Gossips are making rounds in figuring out whose mistake is resulting in this divorce.

Many felt that probably to give clarity that the divorce is not happening because of Naga Chaitanya’s nature, Aamir Khan opened up on the dais.

Aamir’s words are like warm introduction of Naga Chaitanya’s character to all of his fans and film fraternity.

Though Aamir Khan spoke out of his heart without any agenda, as a serendipity this seems to be working towards clearing doubts surrounding Naga Chaitanya’s image with regard to the divorce on cards, if any.

A film journalist present in the event quipped that there is so much potential in Aamir’s speech that it may also work towards making Naga Chaitanya an eligible bachelor in the industry.

No one on Twitter will be able to shut up about I Think You Should Leave’s “Dan Flashes” – The A.V. Club