Jennifer Lopez turned many heads Monday night when she hit the Met Gala red carpet for its “American Independence” theme.

The actress and singer, who was initially photographed sans Ben Affleck, wore a Ralph Lauren ensemble featuring a plunging dress, faux fur, a choker chain and a cowgirl hat.

Affleck appeared to let his girlfriend hit the carpet solo for the camera as the pair were photographed smooching through their masks outside the party.

The 52-year-old has been defying the laws of aging and did so again last weekend when she and Affleck made their red carpet debut as Bennifer 2.0 at the Venice Film Festival.

Then, Lopez made a surprise appearance at the VMAs on Sunday night in Brooklyn, where she presented the award for song of the year to Olivia Rodrigo. 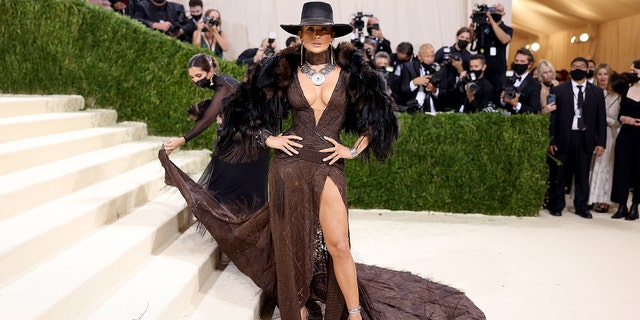 Jennifer Lopez goes with the cowboy hat and Western look in a flowing brown gown with a high-thigh slit and an elegant train.
(Photo by John Shearer/WireImage)

She set the scene in a stunning lace-up crop top and a sparkling cutout mini skirt by David Koma.

Over the weekend, Affleck had to physically hold back a manic fan who desperately wanted to snap a selfie with the “Hustlers” actress at the Venice Film Festival.

Pictures of the confrontation showed a bristly-bearded man – who was maskless – approaching the couple with a camera as they were walking. 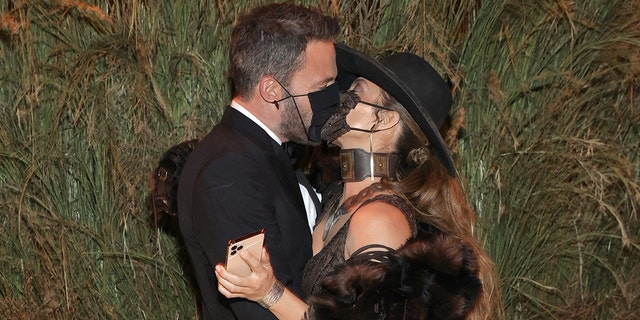 Ben Affleck and Jennifer Lopez are seen sharing a kiss through their masks at the Met Gala.
(Photo by Jamie McCarthy)

Affleck stepped into action throwing his hands up in order to tame the fan before security arrived to escort the man away, according to Page Six.

Lopez and Affleck rekindled their relationship after the singer and her fiancé, Alex Rodriguez, called it quits in April.