Apparently it’s never too soon to start a supergroup; only in this case it involves a band of babies.

On Sunday, Hilary Duff hosted a music class at her home in Los Angeles for a group of infants whose mothers, in some cases, are famous singers in their own right.

The fun activity full of music and singing also included chef and cookbook author Gaby Dalkin and her six-month-old daughter and makeup artist Kelsey Deenihan Fisher and her four-month-old daughter, both of whom are named Poppy.

Duff, 33, took to her Instagram story to share some adorable snapshots, including one where all six babies laid back on a blanket as their moms played with little musical instruments.

The Lizzie McGuire star also shared a snap of her little girl and Tisdale’s daughter laying next to each other, with the caption, ‘Juju has that strong side eye.’

Tisdale would respond by reposting the same photo and writing, ‘She sure does lol.’ 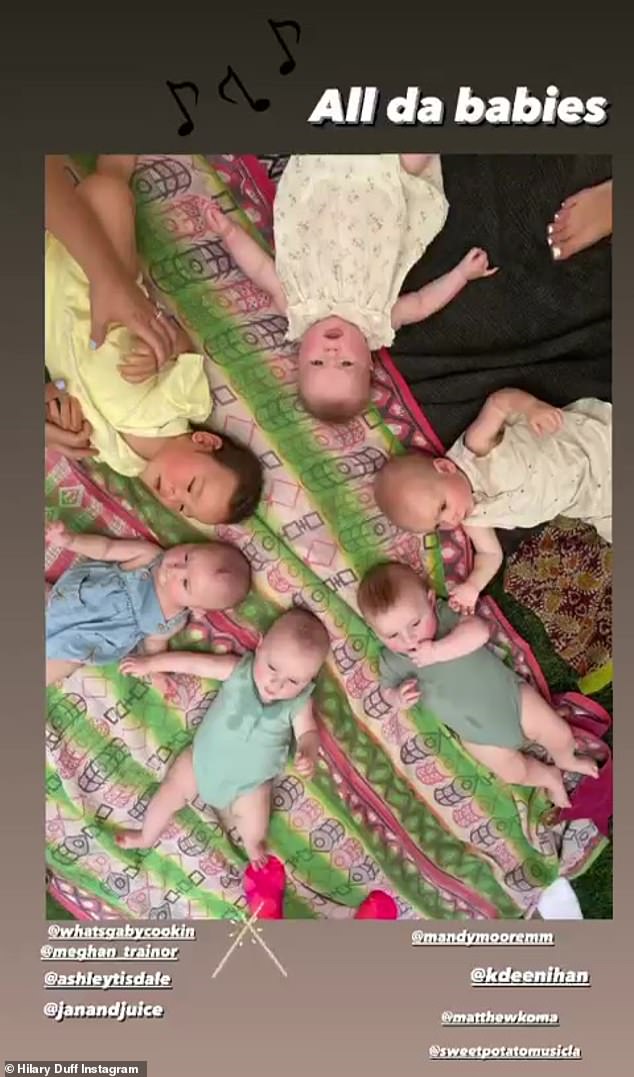 Band of babies: Duff shared an adorable photo of all six babies laying back on a blanket 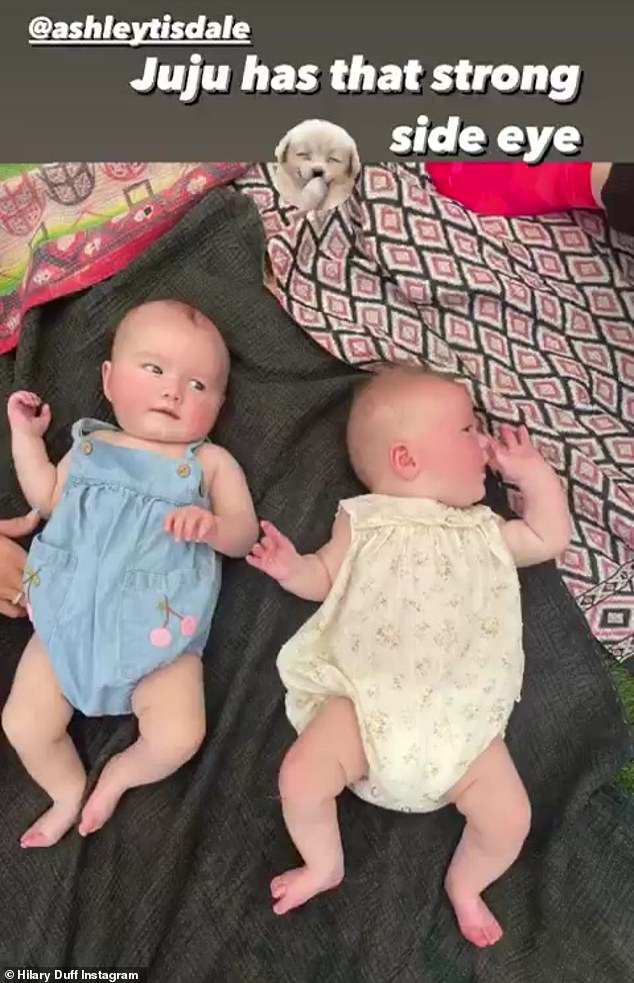 Eye on you: Duff also shared a photo of Mae and Tisdale’s Jupiter laying next to each other, with the cute caption, ‘Juju has that strong side eye’

Tisdale posted a few photos of her own from the music class, which included one showing five of the infants lined up in a row.

Tisdale, 36, went on share a pair of pictures of Jupiter laying on her back and gazing up into the camera. The first photo was simply captioned, ‘First Music Class’, while the second photo showed Jupiter with her mouth open, which her mother captioned, ‘Trying to sing.’ 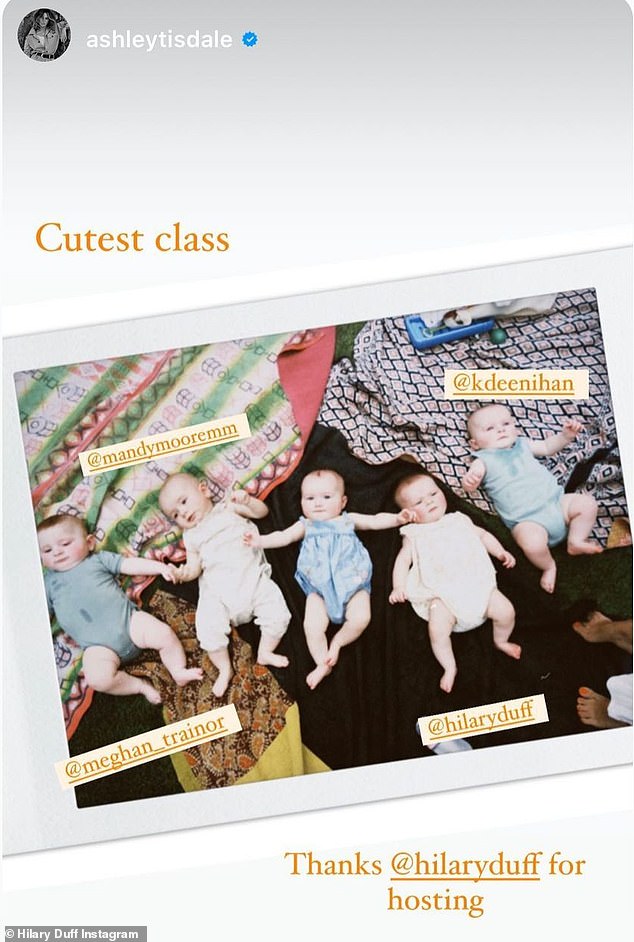 Rockin’ and rollin’: Tisdale called the music playdate the ‘cutest class’ when she thanked Duff for hosting the event 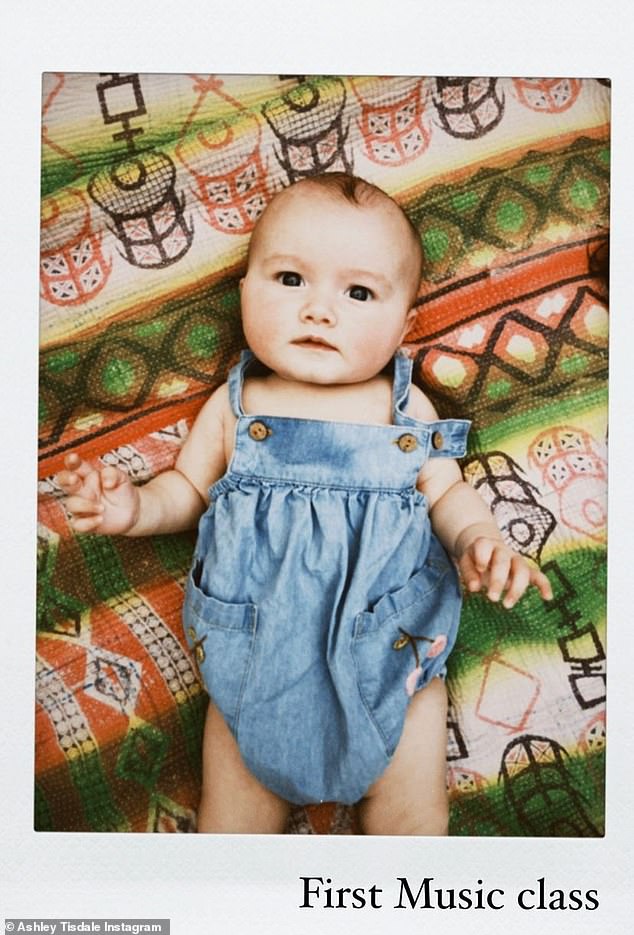 First-timer: Tisdale shared a pair of picture of Jupiter laying on her back and gazing up into the camera with the caption, ‘First Music Class’ 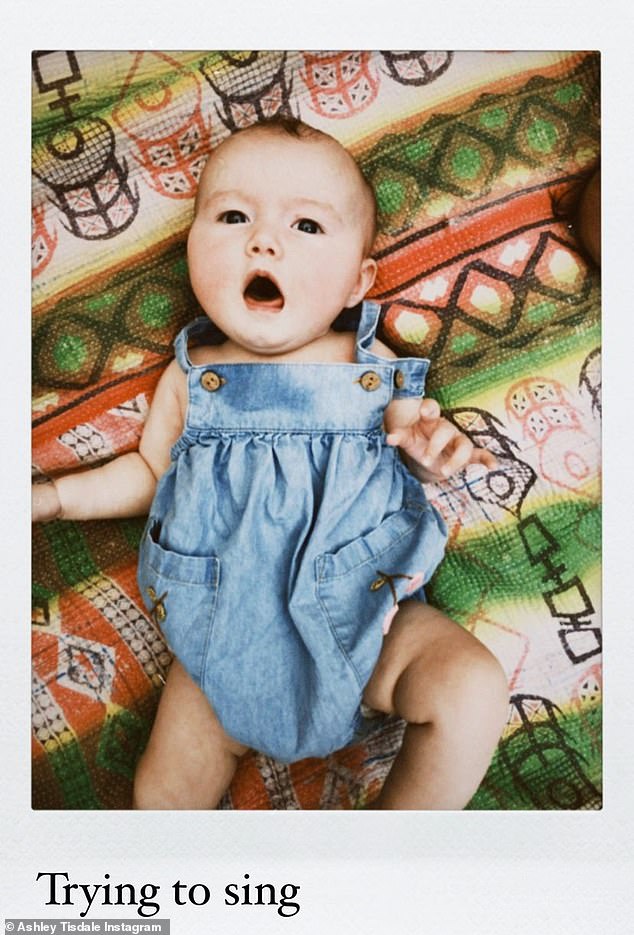 Belting it out! Jupiter’s mom caught her girl in action, ‘trying to sing’, in a second photo 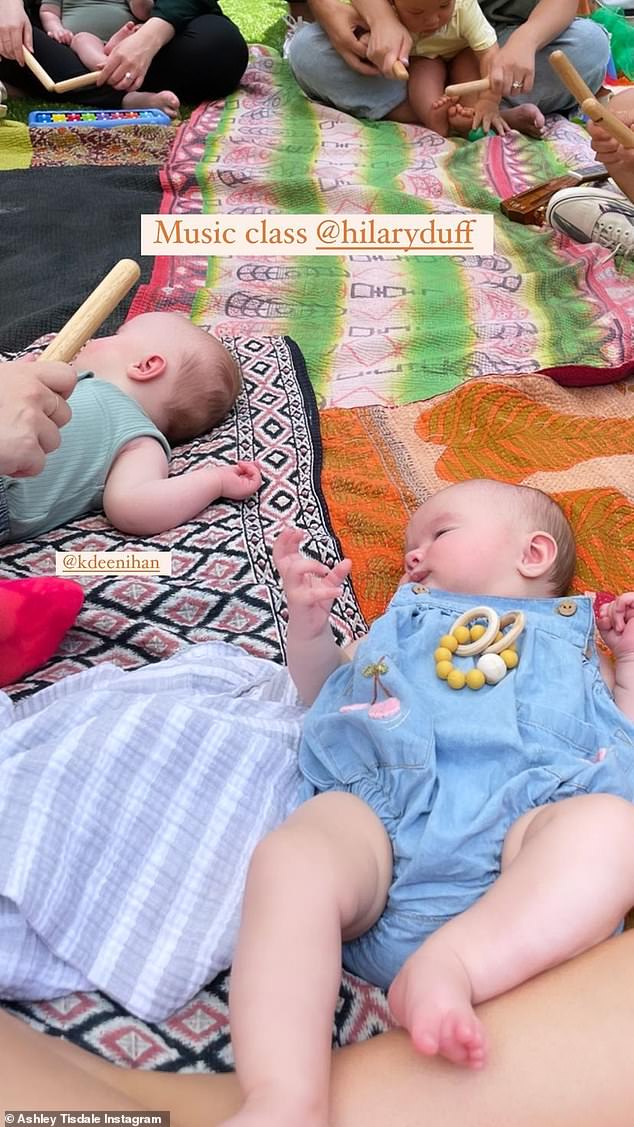 Language of music: The mom played little musical instruments while the kids soaked it all in 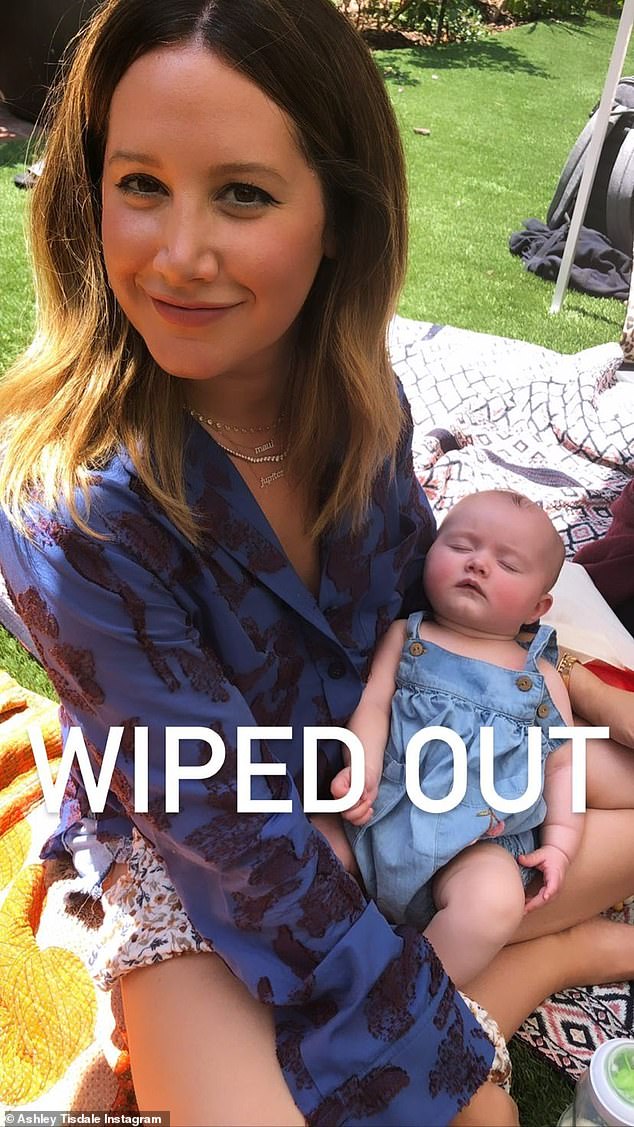 Tiring: Tisdale confessed to be ‘wiped out’ after an afternoon of music with all the babies

Moore, 37, would take to Instagram and first post a selfie snap of herself wearing a mask and wrote, ‘Mama’s first solo trip commences.’

She proceeded to share a couple of the same group photos of the infants.

‘Music class! Thanks for giving us a reason to get together,’ she added in the caption along with a shoutout to @sweetpotatomusicla, which is a play-based class and podcast that emphasizes early musical skill building and fun that was created by flutist, composer, and educator, Leah Paul. 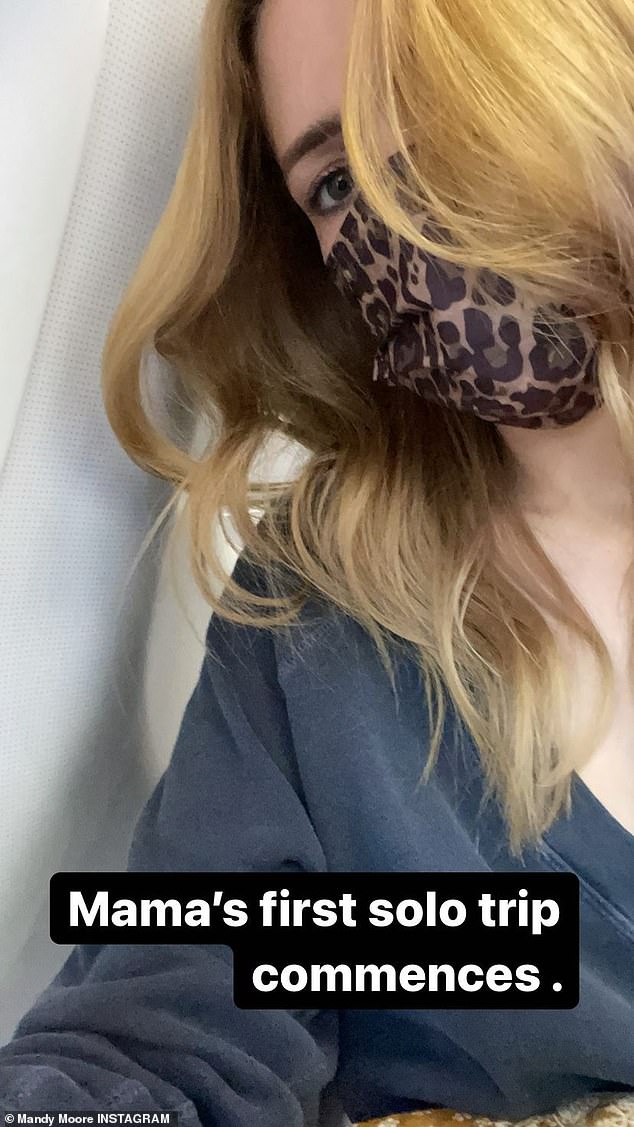 Let the games begin: Moore shared a selfie before the music playdate began at Duff’s home 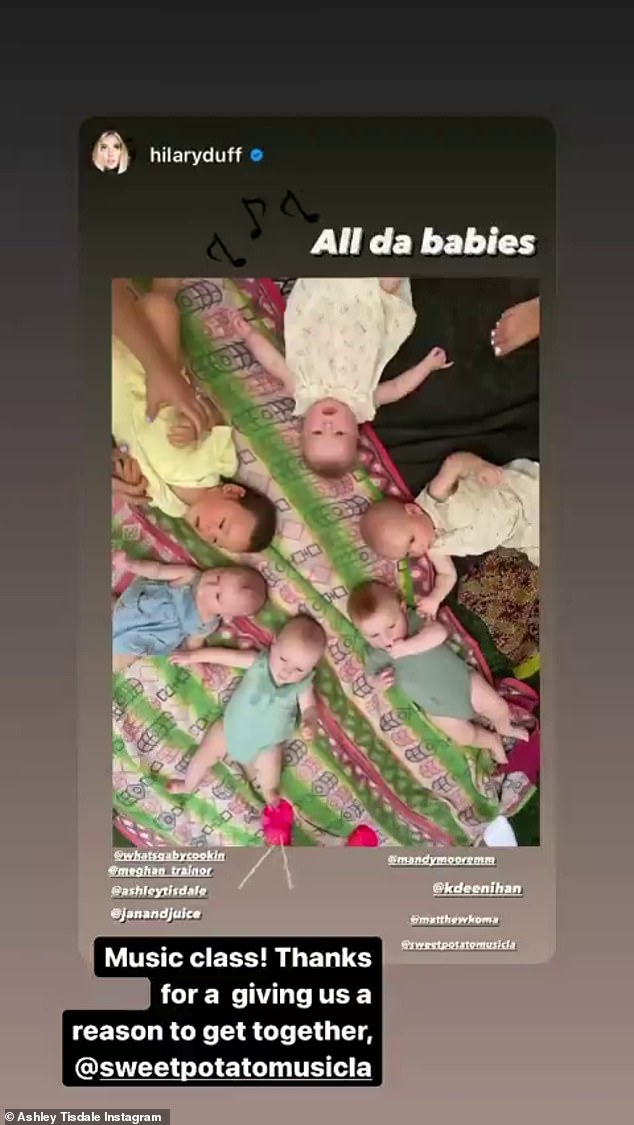 Baby music: The moms gave a shoutout to Sweet Potato Music, which is a play-based class and podcast that emphasizes early musical skill building and fun that was created by flutist, composer, and educator, Leah Paul

Trainer, 27, would also post a few of the group baby photos where she commented, ‘So obsessed’ and ‘New friends alert.’

She also made a point of sharing that the kids were entertained and educated through Sweet Potato Music.

‘Thank you @sweetpotatomusicla for our first music class,’ she wrote below a photo of five of the babies laying on blankets outside.

Fisher showed her sense of humor by explaining why her little girl’s onesie was damp just below her mouth by commenting, ‘Poppy with a good drool.’ 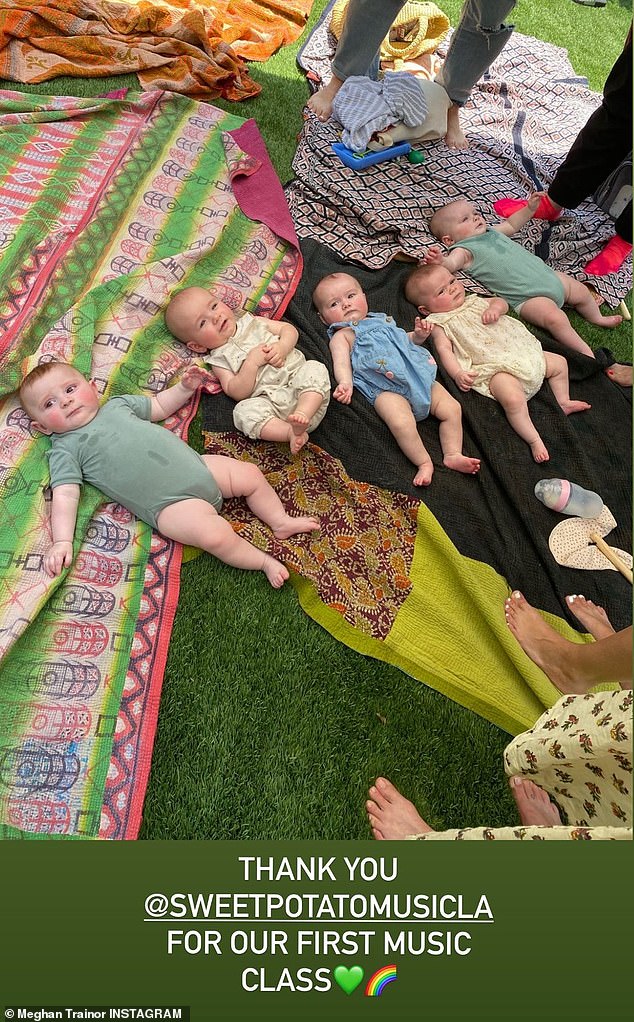 Playdate: Trainor also thanked @sweetpotatomusic for her and her babies’ ‘first music class’ 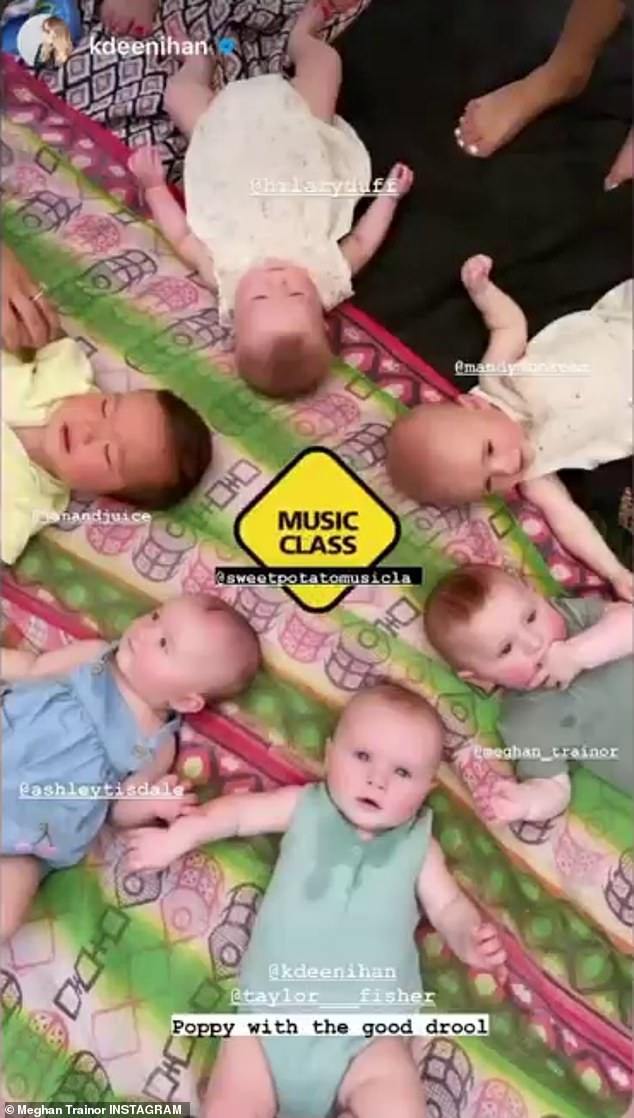 Fisher showed her sense of humor by explaining why her little girl’s onesie was damp just below her mouth by commenting, ‘Poppy with a good drool’

The White Lotus stalls by focusing on the stagnant Mossbacher marriage in “Mysterious Monkeys” – The A.V. Club