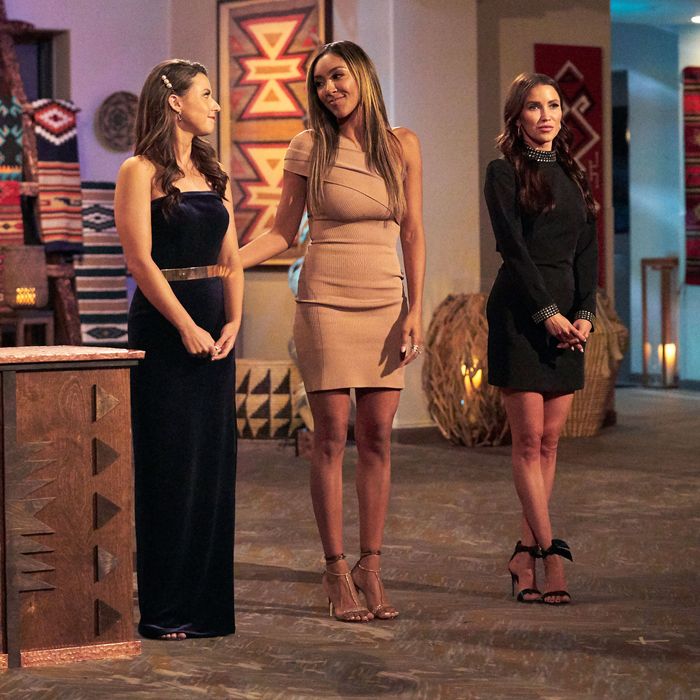 Before we go any further, let me introduce myself. I’m Edgar Blackmon, and I’ll be filling in for Ali Barthwell this week. I’m sure she just has her hands full this week, being NOMINATED FOR AN EMMY and all! I’m excited for her, and for the chance to share my Bachelorette thoughts with more people than my wife and teenage son.

This week’s episode was billed as being wild and chaotic! Five! Surprise! Exits! Who would get sent home? Madness is upon us! JK LOL guys, none of the exits will be surprising, because I sent half these men home in my heart WEEKS ago! The episode begins with Katie talking with Tayshia and Kaitlyn about how sexy the men are, and I had to laugh when my man Aaron popped up out of the hot tub like Aquaman! We couldn’t get access to the pool for that shot? That nasty thing was filled with algae!

Justin gets the first one-on-one date of the show, and I gotta say, I love this guy. I know the internet has been riding my boy because he’s got big eyes and powerful eyebrows that make for incredible reactions, but you know what he’s also got? Great lips. You see this man’s lips? Like a damn Bratz doll. All-Star Lips. Wait, we’re doing wedding photos on this date? Again? We just did this! I can’t wait until they can travel again so we can see who is willing to eat an insect from a street vendor instead of this.

Fine, let’s take fake wedding photos surrounded by a patch of dead desert trees. The vibe is haunting (I think they were going for rustic, but there are no leaves on the trees!), but Katie’s dress is gorgeous, Justin looks great in his tuxedo, and the chemistry is real between the two. Katie covers those lips in frosting and they make out. This man can KISS! When you have full lips, you really gotta control your placement with a thin-lipped kisser, and Justin has it down. No notes.

Later, the two sit down for dinner, and Katie tells Justin that the day was hard, because her father passed and won’t be there to walk her down the aisle. She also says that she found out that he’s not her biological father! The pain this woman has gone through. So while mourning the loss of the man who raised her, she’s also got to contend with the feelings of building a relationship with a NEW DAD? Damn. You know what, though? Justin was so good at listening and being supportive during this moment. He was like, “Baby, take a leap of faith and land on these lips.” I liked this date so much, I don’t even have anything snarky to say about the unknown band that showed up. That’s right, I’m not going to say a single thing about that shirt, it worked great for him. I think we’re falling for Justin!

The group date brings Blake, Andrew, Michael A., Greg, Aaron, Mike P., Brendan, James, Tre, and Hunter together to see if they’re the king to Katie’s queen! When Drag Race All Stars Shea Coulee and Monet X Change sauntered out I screamed at my television. Daddy Mike A. is with me, he’s ready to go all the way with drag! I thought I was over torturing the men, but if this date is about teaching them how to tuck and tape, I WILL ENJOY IT.

Oh damn, they’re supposed to throw shade. I’m sure they do NOT have the range. The men have to debate each other on why they are the best for Katie, and this little debate quickly turns into everyone shitting on Hunter. They say he knows too much about how the show works, and that he has a top four, and that he’s short.  Okay, and??? The Bachelorette has been on for two decades, I’m surprised EVERYONE doesn’t have a working understanding of how the show works!

Hunter gets his chance at revenge, but he takes the high road instead. Why? You don’t want to go after anyone? Not even Brendan? BRENDAN? Here are a couple shots I thought of on the fly: “Brendan, you can swipe your hair to the right, but Katie is still gonna swipe left”; “Brendan, I forgot you were here, I thought someone got lost on their way to a Johnny Bravo convention.” Hunter even got roasted by LeBox James, who is only there because I think Katie forgot about him! Hunter, you gotta stand up for yourself, fam.

That night at the cocktail party, Blake spends his time being horny as hell and telling Katie he’s struggling after a day of not yankin’ it. We all learned that Blake masturbates every night, and twice on the weekends. I guess this IS the “sex positive” season after all. Tre, Aaron, and even James-in-a-Box spend their time with Katie talking about Hunter, and I’m screaming “Build your relationship!” You think hating on Wolverine’s little brother is gonna make this woman fall in love with you? Shit, Tre, you should have listened to Andrew weeks ago, when he told you to stop snitching, but noooo! Katie gets so sick of hearing the men complain about Hunter that she actually throws up. Welp, that’s the end of that date.

Connor is on the last one-on-one, and this man is what happens when you take the words “That’s what she said” and give them human form. Katie says this date is gonna come down to a kiss, and if that’s the case, he’s a dead man. He’s Carlton from Fresh Prince on the basketball court. You want to believe in him, but he’s out of his depth. At the halfway point of this date, they kiss again! I don’t care what music you play underneath, he’s a bad kisser! He’s not adjusting! Two hands to the head EVERY TIME??? The tongue usage is erratic, his rhythm is bad, and he’s pressing. At least this time he held off on the ferocious lip biting.

That night, Connor is putting on his suit with his shirt unbuttoned too far again, and Katie is in a hoodie and jeans! He’s about to get the “Joe Pesci in Goodfellas”! Now I’m cackling. Katie tells him there’s no spark, and he’s gotta go. He looks into the camera and says, “How bad of a kisser am I?” Baby? Bad.

Connor goes to say good-bye to the guys, and they start bawling! It’s very touching because they’re gonna miss him. Tre is SHATTERED. Honestly, though? All y’all can’t marry Katie, soooo link up on Instagram and let’s keep it moving. While the men all mourn the loss of their buddy, Blake is like, “I don’t even know homie like that, so let me go drop this Say Anything on Katie and make out in the hallway of the Tamama.” What a villain. Talk about someone knowing how the game is played. Blake is playing CHESS!

At the final cocktail party, Katie pulls a Making the Band by canceling the cocktail party and making everyone walk to Brooklyn for cheesecake. The men are shook! They line up! Tre looks like he just got done singing backup for Silk Sonic. I love what Katie does here, especially telling the men, “I don’t have time for people to play catch-up.” If it’s not there, it’s not there! Katie gives roses to everyone you would expect, and also Brendan? What did I miss!? Brendan? Is it the power of the Kate Gosselin Haircut? Regardless, Greg, Blake, both Mikes, Justin, and Andrew are all through to next week, where they will all hopefully mind their own business, but NOT LIKELY.

Stay up to date on what happens in paradise

Quentin Tarantino Tells Bill Maher He Still Plans to Retire After One More Film: ‘I’ve Given It Everything I Have’ – Variety