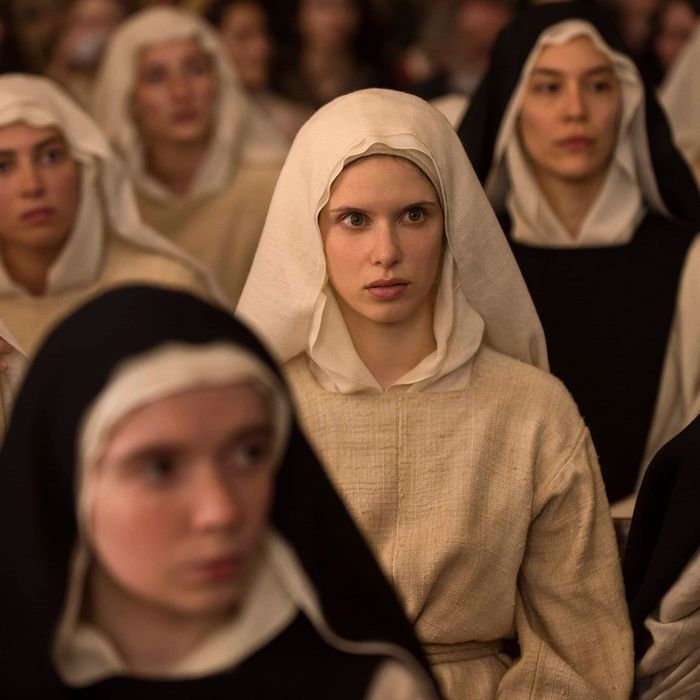 Benedetta follows the titular character (played by a gloriously campy Virginie Efira), a spunky 17th-century Virgin Mary obsessive who’s promised to Jesus by her father after she nearly dies at birth and, as a result, enters a small convent while she’s still a young girl. Almost immediately, it becomes clear that Benedetta is a bit different, the sort of nun-in-training who, when praying to a Virgin Mary statue that falls on top of her with its left boob exposed, licks its nipples. As Benedetta gets older and hotter, her lust for the Lord and his familiars becomes even more intense, and she begins to have visions of herself making out with her “husband,” Jesus Christ himself, who appears to her as a lanky-haired, high-key jealous hottie floating around the uncanny computer-generated skies of Kanye West’s “Bound 2” video.

But just as Benedetta starts getting in touch with her freaky Jesus — and confusing the hell out of the caustic, aloof Sister Felicia (Charlotte Rampling), who can’t tell if Benedetta is having visions or merely insane — a peasant girl named Bartolomea (Daphné Patakia) arrives at the convent. Bartolomea is desperate to escape her abusive father and also, wouldn’t you know it, superhot. Benedetta and Bartolomea have the sort of instant Shane-Carmen connection that one simply cannot ignore; within minutes, the two are trading flirtatious remarks while audibly shitting next to each other in the nunnery’s toilets and, scenes later, as is the lesbian tradition, fucking one another with a wooden figurine of the Virgin Mary carved very carefully into the shape of a dildo. Unfortunately, a simple life of kinky, after-hours lesbian sex in the nunnery kitchen is just not in the cards for these two — Benedetta cannot let go of her lust for Jesus, who starts to possess her, causing stigmata, freaky vocal changes, and roils of orgasmic pain that torment her at night. (Fortunately, Bartolomea selflessly agrees to watch over the tortured Benedetta, separated only by a sheer curtain).

Is Benedetta faking it all for attention, à la Nomi Malone, or is she really a saint who’s going to save her town from the Black Death, à la Cristal Connors? If absolute power corrupts absolutely, does absolute gay power corrupt absolutely gayly? The movie doesn’t soon let on to either question, but what follows is an onslaught of graphic sex, graphic deaths, elaborate nun gossip, Charlotte Rampling being bitchy to everyone (including Florence’s papal nuncio, yet another emissary of the Church who fucks), and incredibly groomed pubic hair.

At Cannes, in my press screening, the movie was received with shocked laughter and applause, and at the larger Lumiere screening, a five-minute standing ovation. Below, I have outlined the wildest, campiest moments in Benedetta — I’ve left out a lot of spoiler moments, but please understand that this thing is beautifully unhinged all the way to the end.

➼ During a play put on by the church, Benedetta witnesses Hot Jesus in a vision. “You’re my wife,” he says cheerfully. Shortly thereafter, he comes to her again, this time at night and a bit more punctured and bloody, asking her to put her hands over his, lay her head on his crown of thorns and then take off his little white loincloth. The two make out as their hands bleed against each other’s, and Benedetta reaches her first paingasm.

➼ Within moments of meeting Benedetta, Bartolomea showers for what is perhaps the first time ever (when we meet her, she is running around in a horde of sheep and says she has never used a real toilet before). In the shower, she literally drops the soap and falls forward, her left boob falling directly into the hands of Benedetta. When she steps out, she asks Benedetta where she can “take a shit,” and the two take a jolly trip to the loo, where they sit next to each other while evacuating their bowels simultaneously and loudly. They wipe with a pile of leaves, and Benedetta tells Bartolomea that she is “beautiful.”

➼ The same day they meet — again, in a 17th-century convent where being gay is punishable by public death — Bartolomea kisses Benedetta right on the mouth before bed, startling and thrilling her. The next morning, at their daily nun meeting (sorry, I am Jewish), Bartolomea plugs a hand right into Benedetta’s bum from behind. In response, Benedetta has an instant public vision of being attacked by vengeful snakes that are then slaughtered to bits by Hot Jesus, who makes out with her yet again. Later, she dreams of being raped by soldiers just before Hot Jesus arrives and chops off their heads with a sword.

➼ Angry at Bartolomea for making her suddenly and spontaneously gay, Benedetta forces her soon-to-be lover to plunge her hand into a pot of boiling water under the auspices of punishing her for a harmless mistake. This turns Bartolomea on, which makes a lot of sense, and the two begin a sexual relationship almost immediately, which commences with Bartolomea caressing her left boob through the sheer curtain in the middle of the night (the conceit being that Benedetta has just received a “larger new heart” from Jesus that she needs Bartolomea to experience for herself, sort of like a new car).

➼ In a side plot that is rarely explained, another nun is bleeding constantly from her left boob. Left boobs are important in this movie.

➼ One of the nuns casually cuts a spy hole in a cement wall, perfectly placed to witness the high-level lesbian sex on display.

➼ More than one nun dies by theatrical suicide.

➼ Someone who shall remain nameless is punished via a horrifying gynecological torture device called “the pear.”

➼ There is a comet.

➼ One of the Florentine nuncio’s pregnant female emissaries boasts, in front of mixed company, that she is producing milk, then takes out her breast and squirts it into his face.

➼ Benedetta masturbates to a pissed-off Bartolomea, then bursts into hysterical tears while receiving an instantaneous message from Hot Jesus.