Earlier this week it was announced that the Duchess of Cambridge was in self-isolation due to coming into contact with someone who later tested positive for COVID-19. But now Kate has ended her isolation and is at Wimbledon with husband Prince William watching the ladies’ singles final.

The Duchess looked smart in a green dress as she took her seat in the royal box on Centre Court just before 2 p.m. to watch world number one Ashleigh Barty play number eight seed Karolina Pliskova. Today is Kate’s second appearance at the championships this year, and it has already been announced that she will also attend the men’s final tomorrow. She took over from the Queen as Patron of Wimbledon’s All England Lawn Tennis and Croquet Club (AELTC) in 2016 when the monarch handed over some patronages in the year she turned 90. 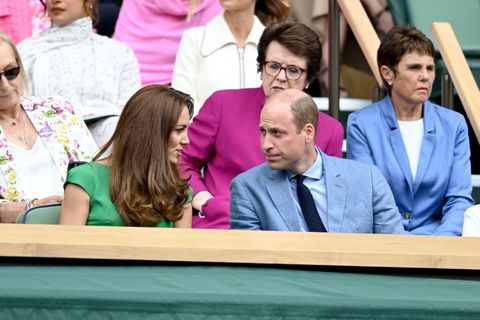 Kate and William in the royal box at Wimbledon today.

It was also announced yesterday that the Duke of Kent is stepping down from his role as President of the AELTC, a position he has held for more than 50 years. The Queen’s cousin will present the trophies for the final time this weekend. In a statement he described his time in the role as an “honor.”

Kensington Palace announced on Monday that Kate was isolating after coming into contact with COVID-19 but said that she was not experiencing any symptoms. She followed government guidelines which meant that she has to complete a 10-day isolation person, starting from when she was last in contact with the person who tested positive. The Duchess, 39, previously announced that she had received her first dose of the COVID-19 vaccination on May 28 at London’s Science Museum. She has since had her second dose. She also takes tests twice a week as part of the royal household’s testing program.

Macy Gray Calls for a Redesign of the U.S. Flag in Juneteenth Essay – E! NEWS