Val Kilmer is opening up in an upcoming documentary.

The 61-year-old is set to be the subject of the documentary “VAL,” which will see him reflect on his decades-long career in Hollywood and much more, including his battle with throat cancer.

The trailer opens with a throwback video of a young Kilmer introducing himself.

“I don’t do this with everything interview I go on,” he said in another previously filmed clip. “Take you inside my home. I don’t. But I’m going to.”

Several of the star’s iconic roles are then highlighted, including appearances in “Top Gun,” “The Doors,” “Batman Forever” and more.

“My name is Val Kilmer. I’m an actor,” a narrator reads. “I’ve lived a magical life and I’ve captured quite a bit about it.”

Then, in another throwback clip, the “Felon” actor said that he was the first person in his orbit to own a video camera, and in spliced footage featuring the likes of Kevin Bacon and Sean Penn, audiences are given a glimpse of the footage captured by the star himself.

VAL KILMER SAYS HE’S DOING GREAT AFTER TRACHEOTOMY: ‘I FEEL A LOT BETTER THAN I SOUND’

“I was recently diagnosed with throat cancer. I’m still recovering,” the narrator says in Kilmer’s place. “It is difficult to talk and be understood. And I want to tell my story more than ever.”

In another brief clip, though it’s not clear what is being discussed, audiences get a glimpse of Kilmer tearing up while his face reddens.

“I’ve tried to see the world as one piece of life,” Kilmer himself said in his now-gravelly voice as he holds his hand over his throat. 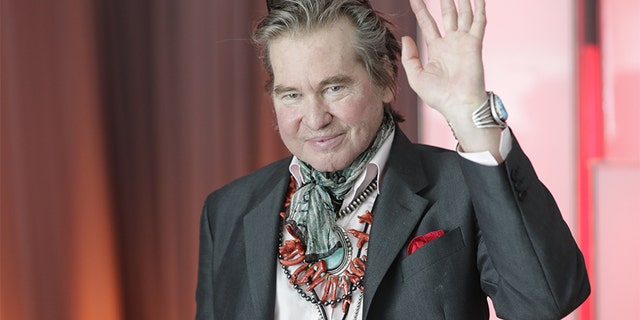 Actor Val Kilmer will be the subject of the documentary ‘VAL,’ which hits theaters July 30 and  will stream on Amazon Prime beginning on Aug. 6.
(Photo by EuropaNewswire/Gado/Getty Images       )

Earlier in the trailer, the narrator explained that Kilmer captured “thousands of hours of videotapes and film reels” that he shot throughout his life and career, which will be utilized in the doc.

“It’s a story about my life,” the narrator promised. “But not my life.”

MARILYN MANSON Reaches Agreement To Turn Himself In To Police In Connection With Alleged Assault In New Hampshire – BLABBERMOUTH.NET