Carroll Baker is making it known exactly where she stands amid the Bill Cosby saga.

A day prior to the embattled actor’s release from prison on overturned sexual assault charges, the 90-year-old Hollywood actress sat down for an interview with The Hollywood Reporter (THR) and said Cosby, 83, was nothing short of “wonderful.” She also called Cosby “a very sexy man” while questioning why his accusers would even want to be alone with him in the first place.

“My heart is broken for Bill Cosby,” the “Baby Doll” star said on the publication’s “The Hollywood Reporter’s Awards Chatter” podcast. “Bill Cosby did not deserve, at his age and in the condition he’s in. … He’s a wonderful human being, absolutely wonderful, and I can’t bear the fact that he’s in prison. I don’t think it was his fault.”

Some 60 women have spoken out against Cosby, who in 2018 was sentenced to three-to-10 years for sexually assaulting Andrea Constand. The former Temple University employee called Cosby’s release “disappointing” in a statement shortly after his conviction was overturned and subsequent release.

“They did it voluntarily… Why would you go into a secluded place with a man? To play pinochle?” Baker pressed in her interview to THR which was published on Tuesday. “I’m sure they were all entranced with him. I have a feeling that that drink was just an aphrodisiac and he did not force them to take it, he just offered it to them. And I think it’s a sin he’s in jail.”

However, Baker – who is of the Golden Era of showbiz performers – sang a different tune when speaking on the convicted rapist and ex-Miramax head honcho Harvey Weinstein, calling the disgraced studio executive, “a maniac.”

“But also these days, I hate the fact that these women do this,” she said. “That they come back from years before and they ruin a man’s career.”

“Also, we fought for the vote, we fought to have the same wages as men,” Baker added. “What the hell do you let a man do that to you for? I wouldn’t let a man do that to me. If he made any pass at me, I would tell him how ugly and disgusting and filthy he was, and get away from me and I hate you, and I’d hit him if I could. We’re not in the 18th century where we were wearing hoopskirts. Women, stick up for yourself and stop playing like you’re such a little girl!” 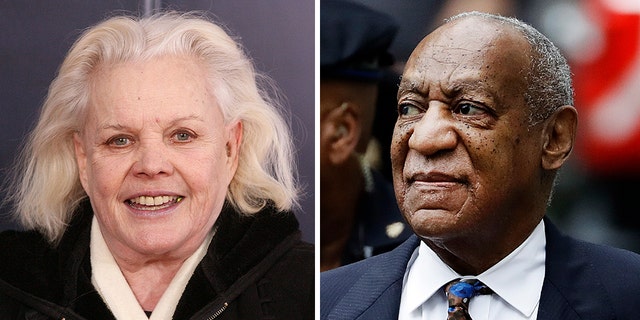 Actress Carroll Baker said one day before Bill Cosby’s release from prison that it was ‘a sin’ the embattled performer was locked up on sexual assault charges.
(Getty Images)

She also said she can recall just one instance of alleged iffy behavior during her many years working in the entertainment industry.

“I was only asked once to lie down on the casting couch, and I just walked out the door,” she shared.

WHAT’S NEXT FOR BILL COSBY AFTER SEX ASSAULT CONVICTION OVERTURNED

Asked if she thought there were “nonconsensual” acts going on perhaps she simply wasn’t aware of, Baker replied, “No, I don’t think so.”

Pennsylvania’s highest court threw out Cosby’s conviction after finding that District Attorney Kevin Steele, the prosecutor who brought the case against Cosby, violated an agreement to not charge him. It was a deal that previous District Attorney Bruce Castor had made in 2005, though it had apparently never been put in writing.

Cosby was released from SCI Phoenix in Collegeville, Penn., outside Philadelphia, just before 2:30 p.m on June 30, state corrections officials told Fox News at the time. He was seen leaving the prison in a white car shortly afterward.

Hollywood’s biggest supporters of the #MeToo and Time’s Up movements – among other celebs – immediately took to social media to slam the verdict. Cosby was the first mega name to be prosecuted for alleged sexual assaults since the #MeToo era blanketed the industry as a whole.