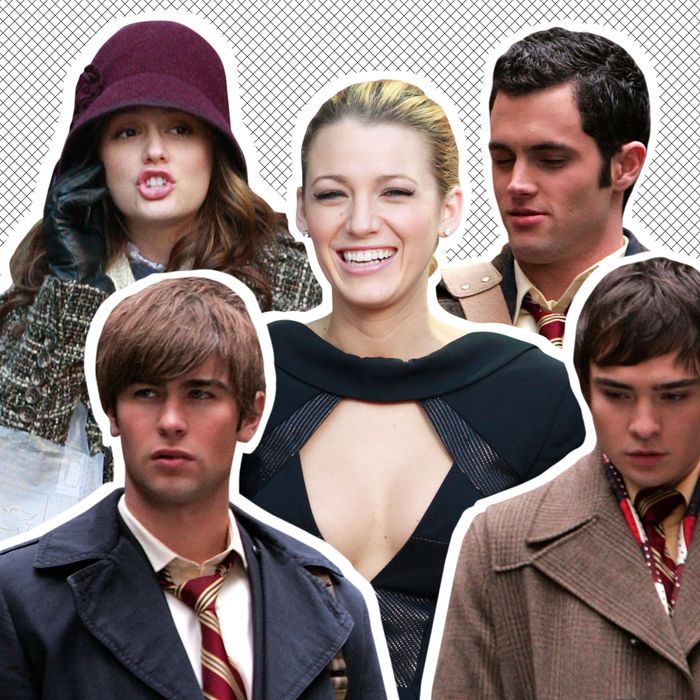 Greetings and a blessed Gossip Girl Reboot Eve to all who celebrate. The much anticipated rebirth of the world’s favorite faux blogger is poised to be hot, murderous, hot, scandalous, notably diverse, and did I mention hot? In preparation for this sacred cultural event, it’s only right we pay our respects to the holy trinity of the Upper East Side: the cast, story lines, and opulent absurdity of the original Gossip Girl series, which ran from 2007 until 2012 and, like the reboot, followed the fancy, rich lives of fancy, rich prep-school teens.

There was Dan Humphrey, the broody outcast played by Penn Badgley, who was published in The New Yorker at age 16. (In the TV series, it was a short story. In the books, it was a poem called “Sluts,” a five-line composition that ended with the line “You’re a whore.”) There was Blake Lively’s Serena van der Woodsen, the quintessential “It” girl who once got a job as a production assistant by [checks notes] bumping into a guy who was reading a book she liked. And who could forget Blair Waldorf, the sentient Chanel bag played by Leighton Meester, in all her overachieving, headband-donning glory?

But throughout all 121 episodes of the original series, it’s the confounding and often unexplained plotlines that have stuck with me the most. It is these moments I hope this new crew of gorgeous youths will confront, grapple with, or at least acknowledge for being completely buck wild in the upcoming series. For your consideration: eight OG Gossip Girl moments I would love the reboot to pay homage to.

Do you have a moment to talk about our Lord and Savior, Hilary Duff? Specifically the scene, during her recurring Gossip Girl season-three role, in which her character Olivia speak-sings Lady Gaga’s “LoveGame”? If it helps, the scene is part of a play written by Dan, based on an idea by Blair, that retells “Snow White” in modern times. Also, it’s put on by the Tisch School of the Arts. No part of it makes sense and thus this new cast of characters must spend at least one (1) episode figuring out how it even came to be. Oh my God, would they be … too young to know who Duff even is?? I need to lie down.

One of my favorite teen-drama tropes is “I have a big secret shhh.” The cast spends multiple episodes, if not entire seasons, like, Hmm, I wonder what the Big Secret is?? And then, once revealed, it’s … barely a big deal. Such was the case with Serena believing she was responsible for a man’s overdose. She gave a chilling confession to Blair — “I killed someone” — and then that was pretty much that. It resurfaced every once in a while but to arguably little consequence. Will the new Gossip Girl cast know Serena as “that girl who thought she killed someone”? Will one of the characters also believe they killed a man, only to realize they, in fact, did not? The suspense is killing me, much unlike Serena and that man.

There are two things I think of when I hear the name Taylor Momsen: (1) she was almost Hannah Montana and (2) that time her Gossip Girl character, Jenny Humphrey, put on a guerrilla-style fashion show. Set to a cover of the Ramones’ “Sheena Is a Punk Rocker,” Jenny crashes a fancy New York Philanthropic Society gala with a runway show featuring pieces from J Humphrey Designs. There’s leather! There’s sunglasses! There’s colorful tights underneath dresses layered over even more dresses! The trailer for the reboot suggests we can expect at least one fashion show, though it appears to have less layers and more fire.

It’s a tale as old as time: Girl and Problematic Boy break up. Girl tries to make him jealous by dating a new guy. Girl realizes New Guy is boring as hell. Then, just as she is about to break things off, boring New Guy reveals he’s actually a British lord. Incredible. Amazing. Duke of Hastings, who? Can’t wait to find out which of the new characters is actually a baron who is from Australia or something.

Lest you forget that this is a glorified soap opera, Gossip Girl gave us the comeback no one asked for but we all deserved when it brought Bart Bass back from the dead. If nothing else, this is a gentle reminder that any beloved new characters the reboot kills off can always be revived.

Somewhere between the elevator kiss and the wedding we’d all been waiting for, it seems everyone just forgot that Dan and Serena were basically stepsiblings. Their parents, Lily van der Woodsen and Rufus Humphrey, were exes, rekindled their relationship, and eventually got married. They later annulled their marriage, but still! I suppose this is no surprise given the fact there was also a story line in which Chace Crawford’s Nate Archibald was hooking up with an older woman — brave! — and that woman was hooking up with her own stepson.

Why U.S. Basketball May Not Coast Through the Olympics