Williams hosted PBS’ “A Capitol Fourth” on Sunday, and it had been announced that she would sing “Lift Every Voice and Sing,” which has become known as the “Black national anthem.”

In the promotion leading up to the show, Williams talked about including the song.

“It’s in celebration of the wonderful opportunity that we now have to celebrate Juneteenth,” USA Today reported the former Miss America saying. “So we are reflective of the times.”

Conservative Twitter jumped on the “national anthem” part and declared it “divisive,” “segregation” and “racist” to have any anthem other than “The Star Spangled Banner,” which was scheduled to be performed by Grammy-award winner Renée Fleming. 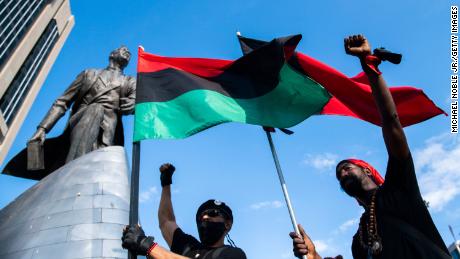 Still, others supported Williams and chalked the whole thing up to social media doing what it does best — outrage.

In launching into the song, Williams, who also performed “God Bless America” earlier in the program, said she was “filled with the spirit of freedom and the perseverance that is required to achieve that most precious right.”

“I dedicate this to our ancestors, to our new federal holiday Juneteenth and to all who celebrate freedom,” she said.

“A Capitol Fourth” has aired for more than four decades and is heavily promoted every year by PBS.

CNN has reached out to reps for Williams and PBS for comment.