“The Real Housewives of Beverly Hills” star Erika Jayne was spotted boarding a private jet just days after a judge ordered her to turn over her financial records as her and estranged husband Tom Girardi’s massive wealth is being investigated.

On Thursday, the “XXXpen$ive” singer, 49, was all smiles while carrying luggage to a private aircraft before jetting out of town. She was assisted by an unknown male who was spotted rolling a suitcase on the tarmac.

Pics show the reality star, who is known for flaunting designer garb and wearing high heels, was photographed in a more casual getup for the departure. Jayne donned a puffy light pink jacket over a hot pink shirt paired with white form-fitting pants and black-and-white sneakers.

On Monday, a judge overseeing Tom Girardi’s law firm Girardi Keese’s Chapter 7 bankruptcy case ordered Jayne’s divorce lawyer Larry Ginsburg, landlord Benjamin Khakshour and accountant Michael Ullmanto to turn over her financial records to a bankruptcy trustee as part of the ongoing investigation into assets she shares with her husband Tom, who she is currently divorcing. 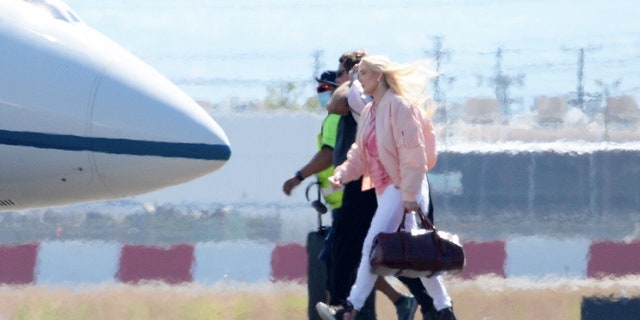 Erika Jayne was spotted boarding a private jet despite her mounting legal and financial troubles.
(MEGA)

Erika’s team will have to submit “key documents” such as bank statements, money orders, checks, and any emails and/or texts regarding her finances. The order comes just days after the reality star was accused in court filings of refusing to turn over her bank records.

“At every turn, Erika has used the glam to continue to aid and abet [these] sham transactions that have been occurring with respect to large transfers of assets from [Girardi Keese] to Erika,” the documents, filed by attorney Ronald N. Richards, alleged. “Moreover, the Trustee has received zero cooperation from Erika which is constant with someone hiding assets.”

“As each day goes by, Erika has been publicly dissipating community assets by selling her clothes on public websites, flaunting large jewels on social media and on television, and has done nothing to assist in return structured firm payments being made to her instead of the firm by the California lottery, notwithstanding she was contacted through counsel over twelve days ago.” 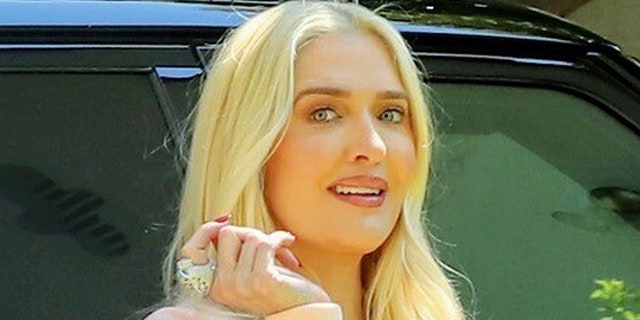 The ‘Real Housewives of Beverly Hills’ star has been ordered to turn over her financial records.
(MEGA)

Meanwhile, the estranged couple and Girardi Keese were accused in a federal lawsuit embezzling millions of dollars intended for airplane crash victims’ families to fund their rich and famous lifestyle. For this reason, fans ripped the TV housewife for her “shameless” decision to board a private jet.

“So taking a private jet, creating new companies to hide and move money is the way you are playing this. No glam squad in prison sweetie, might want to ask Teresa what Fed prison is like,” one person tweeted Saturday.

“You got some nerve going off to god knows where on a private jet lady when you have all this mess at home!! Your Wicked!!!” another wrote.

Other eagle-eyed fans claimed the reality star was wearing a nearly $200,000 Cartier ring in the photos. 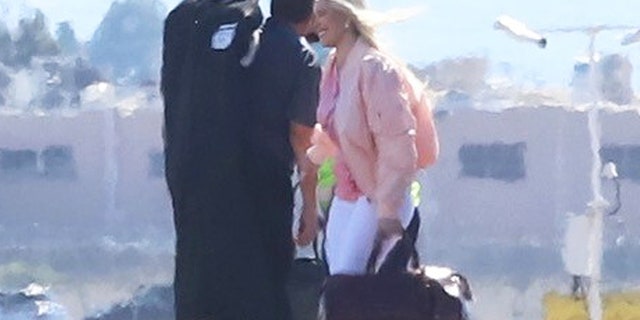 The Broadway performer was previously accused of refusing to turn over her bank records in court documents.
(MEGA)

“Weak is wanting a 100k useless ring over helping a burn victim who was conned by your husband and orphans and widows begging to get the money that belongs to them while you jet on a private jet,” one disgruntled Twitter user added.

In the embezzlement lawsuit filed last December obtained by Fox News, attorneys for plaintiff Edelson PC, a law firm based in Illinois that represents corporate clients, accused Jayne and Girardi of incessantly bragging about their wealth, including their use of private jets and Erika’s and Tom’s lavish gifts to one another, such as a $5,000 toilet and the reality TV star’s $250,000 Lamborghini.

Meanwhile, Jayne has been quite vocal about her marriage to Girardi as well as his wealth on “RHOBH.”

“Based on Tom’s two previous divorces he’s a fighting mother f–ker ’til the end. If I got a Bentley out of this divorce, I’d be thrilled,” she said during a confessional on Season 11 of the Bravo series.

Jayne also once referred to Girardi as “mean and overly dismissive.”

“I saw it for 22 years.  It’s not like he’s going to say ‘Oh great do you want the sofa?” she reportedly said on the show.

She also once ripped her husband for failing to see her take on her debut role of Roxie Hart in “Chicago” on Broadway.

Erika filed for divorce from Tom, a high-profile attorney in California, in November 2020.