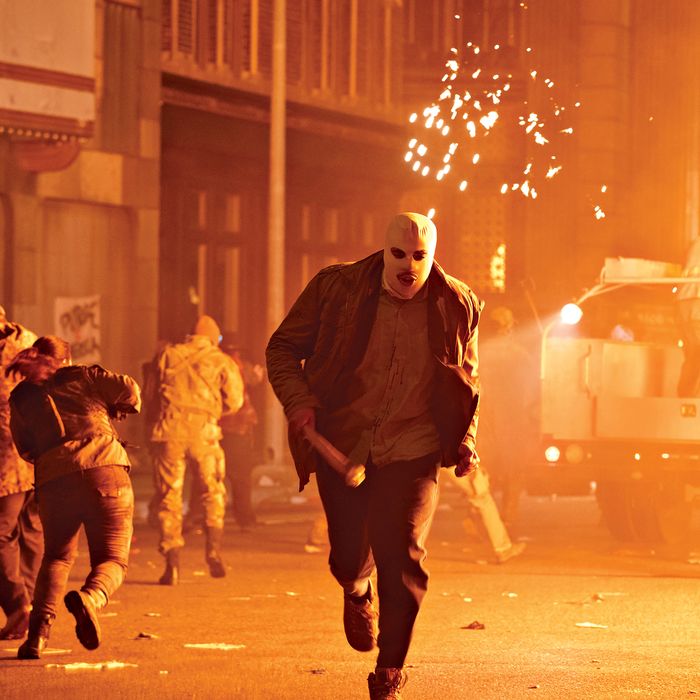 The Purge series was born in rage, and to rage it must return. In interviews, writer and director James DeMonaco has traced the origin of the movies to a fistfight he once got into when a deranged drunk driver nearly killed him and his wife on the Brooklyn-Queens Expressway. Afterward, DeMonaco recalled, his wife — an otherwise sweet doctor — said, “Wouldn’t it be great if we all had one free one a year?” He emerged with the premise of a dystopian but outwardly peaceful United States where, every year for 12 hours, pretty much all crime is legal and citizens are allowed to kill, rape, and pillage at will.

The first film, 2013’s The Purge, used that idea mostly as a nifty but vague backdrop for a fun, slightly futuristic home-invasion thriller starring Ethan Hawke and Lena Headey. It was with the second entry, 2014’s The Purge: Anarchy, that DeMonaco took to the streets to show what Purge Night actually looked and felt like, and the movies came into their own with a cavalcade of monsters ripped from the American id: gun nuts, mad preachers, racist goons, leisure snipers, sadistic gangs, lone-wolf vigilantes, and wealthy psychopaths, overseen by opportunistic politicians manipulating societal dysfunction to their own murderous ends. Whatever the artistic merits of any one entry in the series (shocker: Not all of the movies are good!), it’s bracing to see a big-studio franchise reflect the toxic impulses of American society through its own twisted, blood-soaked lens. The five Purge movies (and the two-season TV series, canceled last year) acknowledge that what really drives American society is rage, and it propels ideology left, right, and center — not the other way around.

That becomes especially clear with The Forever Purge, the most confrontational and nihilistic of the films as well as the most somber and contemplative. Dedicated viewers may recall that Purge Night was vanquished with the happy ending of 2016’s The Purge: Election Year — released just a few months before the election of a president who himself could have been a character straight out of a Purge movie. The new installment tells a story that is as much neo-Western as urban survival thriller. Directed by Everardo Valerio Gout, it opens with Juan (Tenoch Huerta) and Adela (Ana de la Reguera), two Mexican immigrants fleeing cartel violence back home to make a new life across the border in Texas, where they are greeted, unsurprisingly, with a wall that has “These Colors Don’t Run” graffiti scrawled across it. Juan finds work on a ranch; Adela, at a meatpacking plant. Unfortunately for them, however, Purge Night has been reinstated, and various groups of seemingly unconnected psychos have decided one night of slaughter just isn’t enough.

Some of the killers are from white-nationalist militias determined to “purify” American society. Others are workers looking to butcher their bosses, complaining of exploitation and slave wages. One of the franchise’s more overt acknowledgments is that many Americans aren’t looking for justice or to fulfill any other explicitly political goal; the Purgers just want carnage, and they’ll find whatever justification they can.

This results in an unlikely coalition among the good guys. Juan and Adela join wealthy rancher Dylan Tucker (Josh Lucas) and his pregnant wife, Cassie (Cassidy Freeman), among others, as they try to flee to (irony alert!) Mexico, which has now opened its border to American refugees. Dylan is a bigot with a locker full of guns who’s humiliated by the fact that Juan is a better horse wrangler than he is. In previous Purge films, a character like this would have been a prime candidate to use Purge Night to get his resentments out, but Dylan actually hates the event and just wants to live through it. He’s not irredeemable, and it’s clear early on that trying to survive the Forever Purge alongside an assortment of immigrants and activists will help him see the light. Even the so-called New Founding Fathers of America — the Establishmentarian sadists who instituted the Purge in the first place — aren’t the main bad guys this time. In fact, the NFFA is using the military to try to stop the post-Purge Purge from happening, albeit not very effectively.

The Forever Purge jumps through a variety of styles and subgenres as it proceeds; some extended sequences will remind you of a Mad Max flick. The hodgepodge is weirdly appropriate. The genre identity of the Purge movies has always been nebulous. When a couple of jump scares pop up early in the new film, they feel thoroughly unnecessary. We don’t go to Purge movies for momentary frights. We go for existential ones.

Once upon a time, the innate awfulness of humans might have been a controversial notion. The Purge movies have gone back and forth on the matter: In the 2018 prequel, The First Purge, we saw how the participants in the very first Purge Night initially resisted violence, opting to spend their night of freedom partying their hearts out. But this new film settles the matter once and for all. After eight years spent taking the pulse of the country, the Purge films have decided the patient is terminal.