“I would do anything I’d have to do in order to get performances in anything I’m producing,” Diesel said. 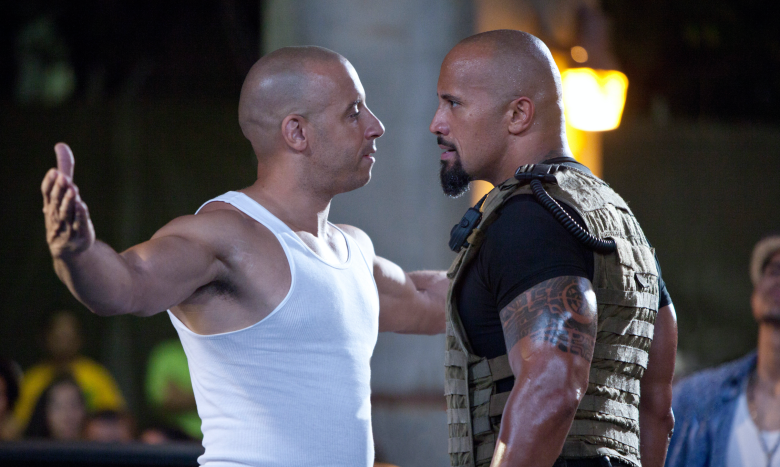 Vin Diesel and Dwayne “The Rock” Johnson’s feud during the making of several “Fast and Furious” films has been well documented (and immortalized by The Rock calling out a “chicken shit” and “candy ass” co-star on social media), and now Diesel is owning up to the part he played in stirring up the set tension. It’s just not in the way you might think. As part of a new Men’s Health profile (via Uproxx), the “Fast” actor and producer said the “tough love” he gave The Rock in trying to get a great performance out of him is what led to the reported tension.

“It was a tough character to embody, the Hobbs character,” Diesel said. “My approach at the time was a lot of tough love to assist in getting that performance where it needed to be. As a producer to say, ‘Okay, we’re going to take Dwayne Johnson, who’s associated with wrestling, and we’re going to force this cinematic world, audience members, to regard his character as someone that they don’t know.’”

Diesel seems to be forgetting that while The Rock will always be associated with his wrestling career, he wasn’t exactly an acting newbie by the time he debuted as Hobbs in 2011’s “Fast Five.” At that point in his acting career, The Rock already had credits such as action films “The Scorpion King” and “Walking Tall,” family movies “The Tooth Fairy” and “The Game Plan,” and dramas like “Gridiron Gang.”

However, Diesel maintained that he needed to step in to get the Hobbs performance he wanted out of The Rock. Diesel said, “Hobbs hits you like a ton of bricks. That’s something that I’m proud of, that aesthetic. That took a lot of work. We had to get there and sometimes, at that time, I could give a lot of tough love. Not Felliniesque, but I would do anything I’d have to do in order to get performances in anything I’m producing.”

What exactly Diesel did to get the desired performance out of The Rock remains to be seen, but it clearly did not sit well with The Rock. The wrestler-turned-actor reprised Hobbs in “Fast & Furious 6” and “Furious 7” before leaving the main franchise for his own spinoff movie “Hobbs & Shaw” with Jason Statham. With two “Fast and Furious” movies left following the release of “F9,” there’s still a chance The Rock and Diesel could share the screen again.

Sign Up: Stay on top of the latest breaking film and TV news! Sign up for our Email Newsletters here.