Alyssa Schueller recently visited Disney’s Epcot theme park, where she was approached by a cast member about the black romper she was wearing. The 22-year-old’s video shows she was guided to a gift shop by a uniformed cast member.

“It’s true guys,” Schueller captioned her clip on Thursday. “Getting escorted to a free shirt bc mine ‘isn’t appropriate.’”

Schueller briefly showed the outfit she wore during her visit, which showed the romper she had on featured a torso cutout.

The video also displayed snapshots of Schueller signing the merchandise voucher she received and walking away with a yellow Walt Disney World Retro Shirt – an item that’s no longer sold on shopDisney.com but retails between $18 and $49.95 from online resellers.

Within four days, Schueller’s video has racked up more than 3.4 million views on TikTok. The viral clip also comes four weeks after park visitor Amanda DiMeo shared a TikTok video about getting asked to wear a Disney shirt in Magic Kingdom because her top showed “under-boob.”

DiMeo told Fox News that she was given a $50 voucher, but was able to get a $75 spirit jersey after she spoke with the manager. In her own words, “Everyone was super nice about the whole process and I didn’t expect the video [to go] that viral.” she added.

Similar to DiMeo’s experience, Schueller explained to her TikTok followers that she wore her romper at one of Disney’s other parks without issue.

“FYI I was at animal kingdom ALL morning without and [sic] issue. Went to Epcot and this happened. Went back to AK and had no issue once again,” she wrote in the comments section under her video. “If Disney wants to endorse a dress code they need to do just that. But the inconsistency… pls.”

Schueller and representatives for Walt Disney World did not immediately respond to Fox New’s request for comment.

Her viral video prompted a conversation about theme park dress codes in the comments section, especially at locations that are marketed to children. However, many were divided on the issue.

“I don’t get it Ariel be wearing less,” wrote American singer and songwriter Zhavia, who once competed in “The Voice” and sang one-half of Aladdin’s “A Whole New World” in the 2019 remake.

“Why does it matter what she’s wearing if she’s paying a fortune just to get into the park anyways,” a top commenter reasoned. Meanwhile, another TikToker asked, “Wouldn’t kids see the same thing if they went to the water park…” 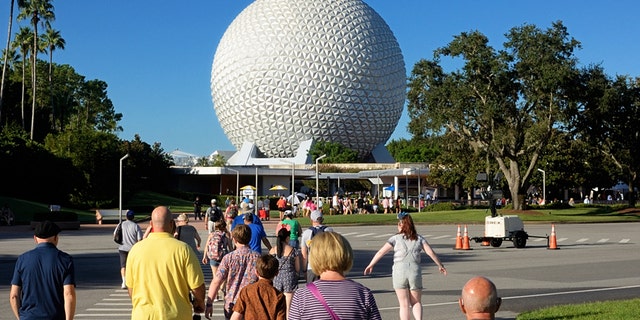 Epcot is one of four theme parks at Walt Disney World Resort. It is located near Lake Buena Vista in Orlando, Fla. (iStock)

Other commenters weren’t as forgiving and thought the romper was not a good choice for a Disney World visit.

“You are at a amusement park for mostly children. Have some decency,” one TikToker chastised.

“You aren’t the only person in the park, they have other people to worry about,” another commenter shared in defense of cast members and Disney Parks. “It’s not inconsistency, it’s your persistence to make their job harder.”

Chrissy Teigen Breaks Monthlong Silence After Backlash Over Bullying Tweets: “I Was A Troll…And I Am So Sorry” – Deadline

Why Meghan Markle Wont Be Attending the Unveiling of the Late Princess Dianas Statue – HarpersBAZAAR.com