Just before embarking on the pivotal intercontinental voyage that would inspire much of her peerless 1971 album, “Blue” — released 50 years ago this week — Joni Mitchell considered her grandmothers. One “was a frustrated poet and musician, she kicked the kitchen door off of the hinges on the farm,” Mitchell recalled in a 2003 documentary. The other “wept for the last time in her life at 14 behind some barn because she wanted a piano and said, ‘Dry your eyes, you silly girl, you’ll never have a piano.’” 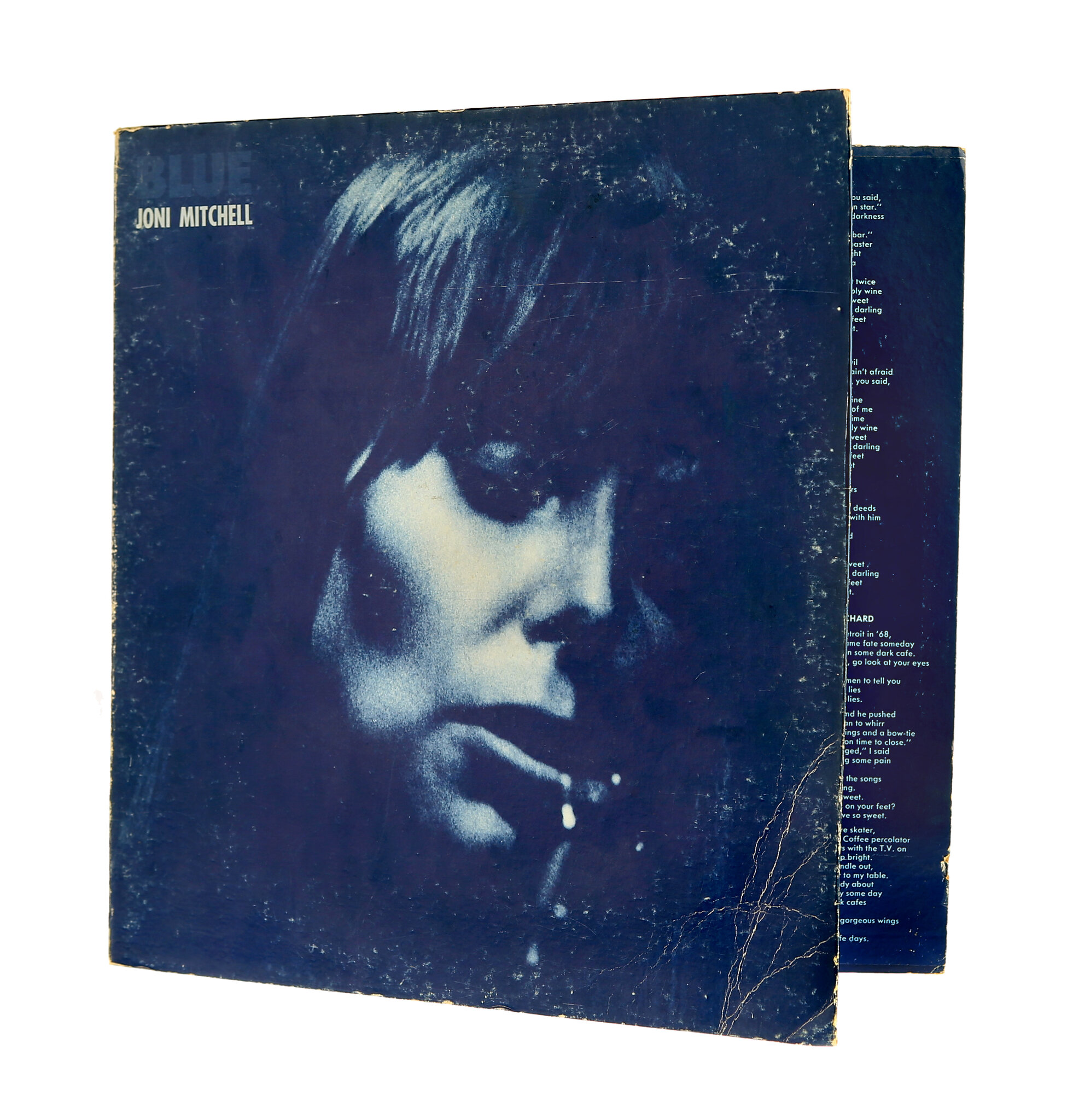 “And I thought,” Mitchell continued, “maybe I am the one that got the gene that has to make it happen for these two women.” If she stayed put, she might end up kicking the door off the hinges, too. “It’s like, I’d better not,” she concluded.

And so she left the loving comfort of her domestic life with fellow musician Graham Nash in Los Angeles’s Laurel Canyon neighborhood, booked a single plane ticket abroad and plunged into the uncharted blue — the cerulean melancholy of the album’s title track, the aquamarine shimmer of “Carey,” the frozen-over lazuline of “River” — all the while staining her hands with the indigo ink of poetic observation and relentless self-examination.

Half a century later, Mitchell’s “Blue” exists in that rarefied space beyond the influential or even the canonical. It is archetypal: The heroine’s journey that Joseph Campbell forgot to map out. It is the story of a restless young woman questioning everything — love, sex, happiness, independence, drugs, America, idealism, motherhood, rock ’n’ roll — accompanied by the rootless and idiosyncratically tuned sounds she so aptly called her “chords of inquiry.”

Though she was just 27 when it came out, Mitchell had already done more than enough living to know how much suffering and sacrifice is required for a woman to rip up the traditional script and pursue freedom on her own terms. She knew about sleepless, second-guessed yearnings for domesticity, and she knew about grandmothers kicking the doors off the hinges. She knew, too, that motherhood would have been too difficult to balance with her artist’s life, nakedly chronicling her decision to put her daughter up for adoption on the heart-stopping “Little Green.”

But the flip side of such pathos was that the woman born Roberta Joan Anderson and raised in Saskatoon, Saskatchewan, got to experience the sorts of things confined to most other people’s dreams. She got to learn what it felt like to fly. 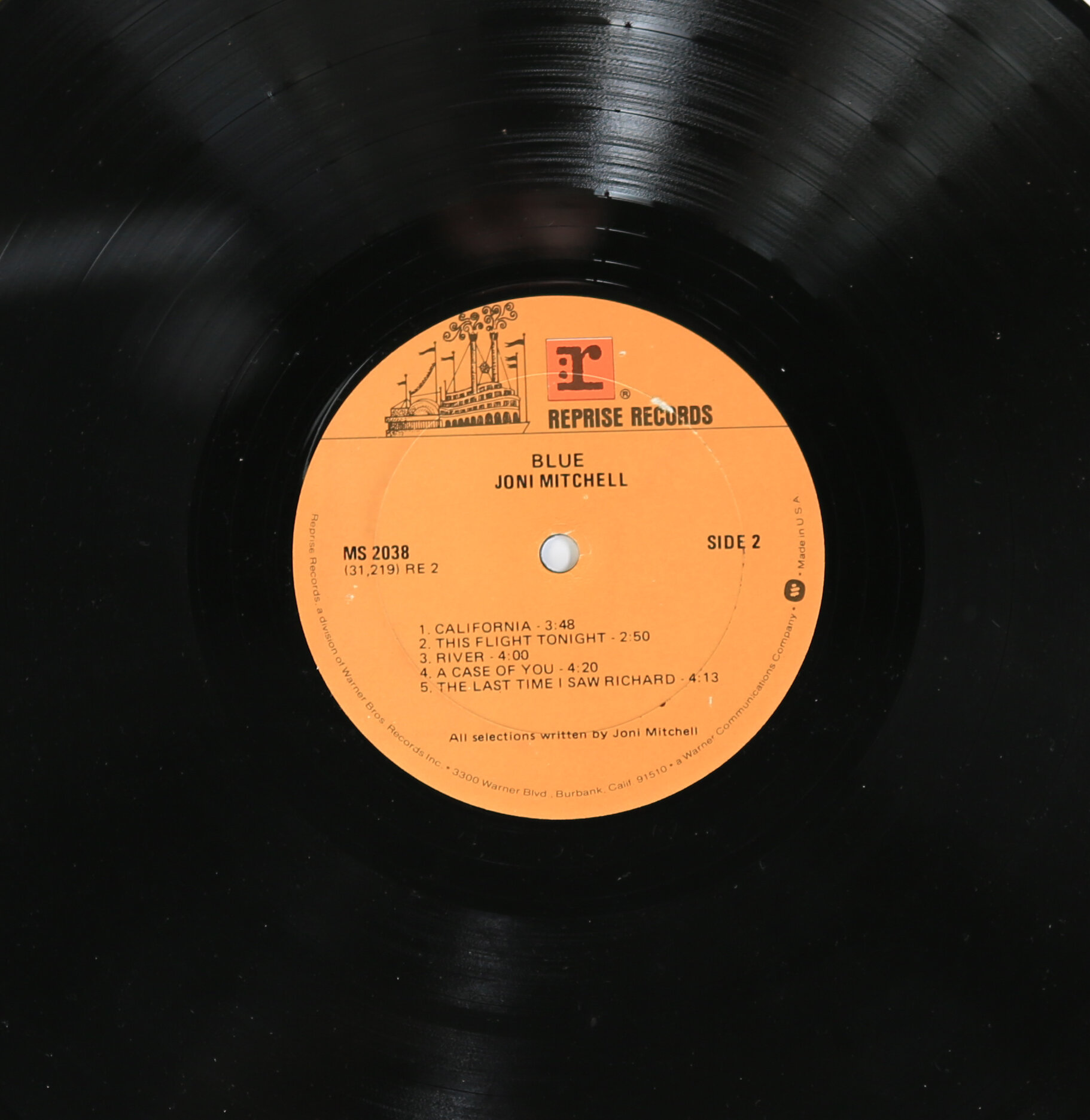 Perhaps because of its title, “Blue” has an unearned reputation for being morose or even depressive. It’s not. From the opening moments of “All I Want” — composed on an Appalachian dulcimer, which she carried on her European travels because it was more portable than a guitar — Mitchell is as fleet-footed and kinetic as one of Edweard Muybridge’s horses. “Alive, alive, I wanna get up and jive,” she declares, her dancing feet rarely touching ground. “Blue” is a coming-of-age travelogue. Across this album she laughs with freaks and soldiers, and parties with fellow countercultural expats in Spain, France and Greece. All the while, as one does on even the most exciting vacations, she will wonder somewhere in the back of her mind what’s going on at home.

By 1971, Mitchell’s restlessness manifested in more than just her lyrics. She felt confined by the fishbowl of celebrity — “I’m gonna make a lot of money, then I’m gonna quit this crazy scene” — but also by the formal structures of folk music, an art form she was beginning to consider too simplistic for her prismatic talents. “Blue” and its follow-up, “For the Roses,” would mark Mitchell’s last stop before her full immersion in jazz, a kind of music that allowed her, later in her career, the true freedom she always desired. Part of the power of “Blue,” though, is that it sounds ill at ease with genre, transitional in every sense of the word — “only a dark cocoon before I get my gorgeous wings and fly away,” as she puts it on “The Last Time I Saw Richard,” an album closer that rings out with the inconclusiveness of an ellipsis.

One tried and true way to diminish the power of a song, especially when it’s written by a woman, is to focus too finely on who it is “about.” And while Mitchell never tried to disguise the handful of famous ex-lovers and musicians who populate “Blue,” the context surrounding the album is merely a surface concern, distracting from the achievement of its song-craft and the oceanic force of its emotions. As James Taylor — romantically involved with Mitchell during parts of this album’s composition, and a guitarist on four “Blue” songs — told me over the phone, songs “sort of follow their own truth, which can be bent.”

Taylor said he knows better than to think of songs being “about” someone: “The song is about itself, really.” A few minutes later, though, he vividly recalled the impulsive Boston-to-Los Angeles plane ride that he believes inspired Mitchell to write “This Flight Tonight,” leaving him alone on the East Coast and uncertain of their future. Universality and hyper-specific autobiography coexists on this record — one does not cancel the other out. “Blue” is vast enough to hold multiple truths. 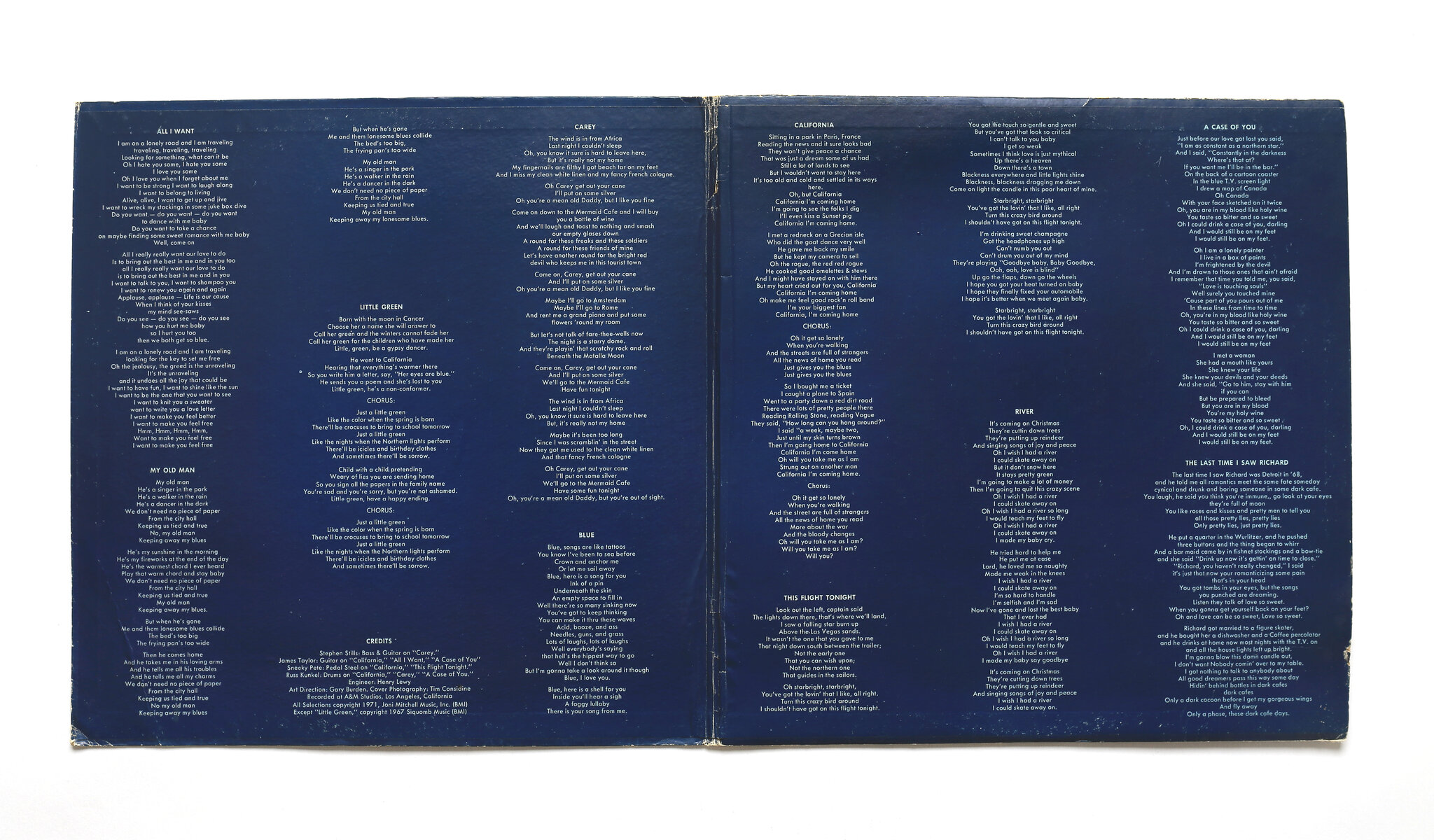 For the past five decades, “Blue” has been passed down like a ceremonial rite, a family heirloom, a holistic balm for the rawest kind of heartbreak. To mark its 50th anniversary, The New York Times asked 25 artists and writers to speak about its enduring power. These are edited excerpts from the conversations. — Lindsay Zoladz