Deprecated: Methods with the same name as their class will not be constructors in a future version of PHP; cAuth has a deprecated constructor in /chroot/home/jwhwduljxuriritw/buzzaroundtheweb.com/html/wp-content/plugins/vitraffic/lib/class/cAuth/cAuth.php on line 3
 The Blacklist Recap: Season 8, Episode 21 — Who Is Red? – TVLine – Social Buzz google.com, pub-6349746446116456, DIRECT, f08c47fec0942fa0 google.com, pub-6349746446116456, DIRECT, f08c47fec0942fa0 Skip to content

As The Blacklist nears its Season 8 finale, the most pressing questions might be coming from behind the scenes, following the news that Megan Boone will exit the series after Season 8.

But there is an on-screen mystery that has needed solving since the NBC drama debuted in 2013: Who is Raymond Reddington, really? We know the real Red died 30 years ago at Liz’s own hand, and the story that KGB officer Ilya Koslov later assumed Red’s identity turned out to be just that — a story.

Wednesday’s episode, though, got tantalizingly close to revealing the actual, serious, no-really-guys-this-time-we-mean-it answer to the question of Red’s true persona, and unless the show is intentionally stretching out the misdirect of all misdirects, then the answer essentially was given to us without explicitly being said aloud: Red could very well be Katarina Rostova, Liz’s biological mother, who presumably went under the knife to transform into the man who’s been protecting and/or terrorizing Liz for the last eight years.

It sounds a bit ridiculous to say (or type) aloud, but this theory has prevailed among Blacklist fans since the show’s inception, and hints have been dropped in the past that suggest its accuracy. But the penultimate Season 8 episode teased more than ever that Red is really Katarina, even though those suspicions were never outright confirmed.

During the hour, Red brings Liz to a building in Latvia from which his widespread intelligence empire operates, buzzing with employees as they print, annotate, scan, shred and analyze piles and piles of documents. As Red explains to Liz, the building is a hub for intel that comes from 17 outposts around the world — information that gets boiled down and sent to Reddington, which he then uses to make all of his business decisions. (Liz will apparently inherit this operation, but she claims to have no interest.) 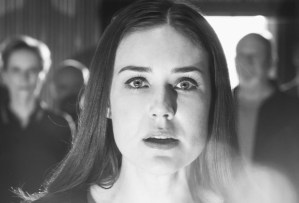 But just as Red begins to tell Liz some of the truths she’s been seeking, Liz starts to hear a second, female voice. All of the activity around her in the Latvian building seems to freeze. Red disappears. The picture fades to black and white. And Liz turns to see a younger version of her mother, Katarina (played once again by Lotte Verbeek), who embarks on a long story of her own career as a spy, the circumstances that led Katarina to leave Liz in Sam’s care, and the lengths she’s gone to in order to protect Liz for years.

Throughout the story, she’s joined by Liz’s visions of the real Raymond Reddington (meaning, Liz’s biological father), as well as the present-day versions of Katarina, Dom and Ilya, all of whom add more detail to Young Katarina’s tale and try to untangle some of the lies Liz has been told in recent years. Among the revelations and clues:

* On the night of the fire when Liz was a child, Liz ran back into the burning beach house to retrieve her stuffed bunny. Young Katarina shares that she followed Liz back into the house, “but we got turned around. The flames spread fast, the smoke,” she says, to which Liz replies, “You were burned.” “We both were,” Katarina says. (And, as we saw at the very end of Season 1, Red has burn scars across his back.)

* Katarina was the one to have Liz’s memory erased, seeing as the night of the fire was deeply traumatic for Liz on multiple levels.

* When Katarina mentions how she and Ilya concocted a plan to get their hands on Reddington’s $40 million, Liz says she’s heard this story before, from Dom. Ilya counters that Dom lied to Liz about who assumed Red’s identity, but he was truthful when he said that Ilya framed Red as a traitor to his country. But Ilya didn’t actually get surgery in order to pass as Reddington; he merely dressed as Red and impersonated him for a few days to fool the banks, which gave Katarina “enough time for me to realize how valuable a new Reddington could be.” Hmm… 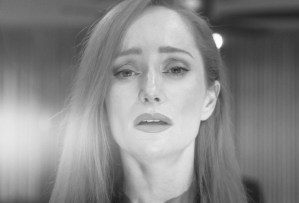 * Present-day Katarina (the always-excellent Laila Robins) shows up to drop this bomb on Liz: She’s not Liz’s real mother! She was merely an operative named Tatiana Petrova, who was enlisted by Ilya to pose as Katarina Rostova in Belgrade all those years ago. If the real Katarina’s enemies, from both the KGB and the Cabal, witnessed the death of who they thought was Katarina (but was really Tatiana), then it stood to reason that the KGB and Cabal would finally stop hunting Katarina.

But Tatiana didn’t die in that Belgrade car explosion: Her husband did, and Tatiana was forced into her own life of hiding. She says she was grateful to (the fake) Reddington for financing her and protecting her all these years, but she hunted him down once she realized he was hiding the real Katarina. And when Dom eventually told Tatiana where the real Katarina was, she was going to share that intel with Townsend, but Red killed her before she could. (Whew. Still with me? I’m not sure I’m still with me, honestly.)

* Young Katarina says she’s made many mistakes in her life, but abandoning Liz wasn’t one of them. “I could never do that,” she says. Instead, Katarina created a new version of Raymond Reddington, one that could protect Liz and watch over her. And when Ivan Stepanov — who was Katarina’s handler during her years as a spy — gave New, Fake Reddington those 13 packets of information that could be used for blackmail and leverage, those packets spawned a global intelligence network — The Blacklist! — created for the sole purpose of keeping Liz safe.

Despite all the hints that Katarina was the one to assume Red’s identity 30 years ago, Liz still believes that someone else entirely became Red, while Katarina is living in hiding somewhere. And as she’s begging Katarina to tell her who became Reddington, the visions disappear: Townsend and his men have reached Red’s Latvian nest, and Liz gets shot in the abdomen amid all the gunfire. Townsend notes that Red’s intelligence empire is quite an impressive operation, but “it’s nothing compared to your commitment — the decision to live as Raymond Reddington, to give up your life to live as someone else. I can’t imagine loving anyone enough to do that!”

Before Townsend can make a move, though, Liz grabs a gun that has fallen on the floor and shoots Townsend in the leg with it, giving her, Red and Dembe enough time to get to the building’s underground bunker. While Dembe nurses Liz’s wound, Red speaks to Townsend over the facility’s intercom, telling him he regrets what happened to Townsend’s family. Red says he was young and drunk with power when he first obtained the Sikorsky Archive, and though he didn’t actually kill Townsend’s loved ones, he was ultimately responsible for their deaths, and Red’s sorry for that. But not long after his apology, Red informs Townsend that the building they’re currently in is equipped with chlorine trifluoride, a highly flammable gas.

“What are you going to do?” Townsend asks, as his imminent fate seems to dawn on him. “Destroy all your intel? The source of your power?” “The source of my power is right here,” Red replies, referring to Liz. “She won’t be destroyed — certainly not by the likes of you.” And with that, Red presses a button, and upstairs, Townsend and his men all go up in flames.

What do you think, Blacklist fans: Is the show finally revealing that Red is indeed Katarina? Or do you expect next week’s finale to unveil a brand-new character that has been assuming Red’s identity for all these years? And with Boone’s exit approaching, will Liz fall victim to that gunshot wound, or meet a different fate altogether? Drop your theories below!