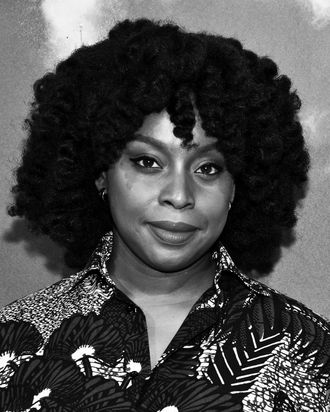 On Tuesday, acclaimed Nigerian writer Chimamanda Ngozi Adichie — author of the best-selling novel Americanah and widely known for her TED Talk on feminism, which was featured in Beyoncé’s “***Flawless” — published a three-part essay on her website entitled, “It Is Obscene.” In it, she addresses past accusations of transphobia, her experience with two unnamed writers who she alleges spread “falsehoods” about her, and her thoughts on social media “sanctimony” as a whole. “In this age of social media, where a story travels the world in minutes,” Adichie writes, “silence sometimes means that other people can hijack your story and soon, their false version becomes the defining story about you.”

The essay is, in large part, a response to backlash Adichie has faced in recent years from the public and peers who have found her comments offensive and transphobic.

During an interview discussing feminism and gender with Britain’s Channel 4 news, Adichie was asked whether it matters “how you arrived” at being a woman and whether a trans woman is “any less of a real woman” if she also grew up “enjoying the privileges of being a man.” In response, Adichie began by saying, “When people talk about, ‘Are trans women women?’ my feeling is trans women are trans women.” She added that conversations regarding gender are “about the way the world treats us, and I think if you’ve lived in the world as a man with the privileges that the world accords to men and then sort of change gender, it’s difficult for me to accept that then we can equate your experience with the experience of a woman who has lived from the beginning as a woman and who has not been accorded those privileges that men are.” She also said, “I don’t think it’s a good thing to talk about women’s issues being exactly the same as the issues of trans women because I don’t think that’s true.”

Trans writers and activists were critical of the comments, which seemed to echo sentiments often used by trans-exclusionary radical feminists (TERFS) to remove trans women from conversations on women’s rights as a whole. Others questioned the author’s perceived authority in conversations on trans women’s experiences to begin with, given that Adichie is cisgender. As writer and activist Raquel Willis wrote, “Chimamanda being asked about trans women is like Lena Dunham being asked about Black women. It doesn’t work. We can speak for ourselves.”

A few days after the interview aired, Adichie posted a statement addressing the criticism and accusations of transphobia. While Adichie did reflect on﻿ her initial, defensive response to being labeled “transphobic” — “It felt like a white person saying ‘I’m not racist, I supported civil rights’” — she seemed to double down on the distinction she’d previously made between the experiences of trans woman and cis women: “A trans woman is a person born male and a person who, before transitioning, was treated as male by the world. Which means that they experienced the privileges that the world accords men. This does not dismiss the pain of gender confusion or the difficult complexities of how they felt living in bodies not their own.”

This statement drew additional criticism as Adichie didn’t overtly apologize for the comments she made during her Channel 4 interview. “I didn’t apologize because I don’t think I have anything to apologize for,” she said, per the Guardian.

During an interview with the Guardian, Adichie said she was interested by “all the noise” surrounding an essay J.K. Rowling wrote on sex and gender earlier that year, after the Harry Potter author had been repeatedly accused of transphobia. (The essay itself, which included Rowling’s fear that as a survivor of sexual assault and domestic abuse, opening the doors of a women’s restroom to “any man who believes or feels he’s a woman” means “open[ing] the door to any and all men who wish to come inside,” was also widely criticized for being transphobic, as it seemed to double down on her implication that trans women do not actually qualify as women.) Adichie told the Guardian she thought Rowling’s essay was “a perfectly reasonable piece,” saying she thinks “J.K. Rowling is a woman who is progressive, who clearly stands for and believes in diversity.” Adichie then criticized social media’s “rush to censure,” which she described as “cruel and sad.” She added, “And in terms of ideas, it is fundamentally uninteresting. The orthodoxy, the idea that you are supposed to mouth the words, it is so boring. In general, human beings are emotionally intelligent enough to know when something is coming from a bad place.”

The Guardian interview was pegged to Adichie winning the Women’s Prize for Fiction award. The book prize itself had also come under criticism when, earlier in 2020, organizers asked shortlist nominee, Akwaeke Emezi, who is nonbinary and transgender, for information on their sex as “defined by law.”

In the first part of the essay — in which she again reiterates that “a trans woman is a trans woman” — Adichie details her relationship with a young female writer who she mentored and housed after the writer attended Adichie’s writing workshop in Lagos. (It’s unclear what year this took place, though it was prior to the March 2017 interview which ignited accusations of transphobia against Adichie.) After that 2017 interview, Adichie says this unnamed writer “publicly insulted” her on social media rather than approaching her privately. Despite the writer reaching out a couple times since then — Adichie’s essay includes two emails the writer sent her in 2017 and 2018 — Adichie says she ignored any attempts to reconnect and chalked the writer’s public criticism as a fame grab: “It is a simple story — you got close to a famous person, you publicly insulted the famous person to aggrandize yourself, the famous person cut you off, you sent emails and texts that were ignored, and you then decided to go on social media to peddle falsehoods.”

In the essay’s second part, Adichie talks about a second unnamed writer, detailing a similar account to the first, though she says their relationship was not as close: Adichie met the writer at a workshop, the writer expressed gratitude for Adichie’s support — Adichie also included two emails this writer sent in 2015 and 2016 — then the two had a falling out after the writer allegedly “insulted [Adichie] on social media, calling [her], among other things, a murderer,” after the 2017 interview. In 2018, this writer had a book coming out, and Adichie was informed that her name was included in the official book bio. Adichie asked that her name be removed, which it was, but she alleges that “from time to time, I would be informed of yet another social media post in which this person had attacked me.” Adichie’s criticism of this second writer is arguably harsher and more personal than her criticism of the first, as she questions their “perverse self-absorption” and “utter lack of self-awareness.”

As a whole, the essay seems to chastise the public-facing behavior of these writers, particularly when they are critical of her. “There are many social-media-savvy people who are choking on sanctimony and lacking in compassion,” Adichie writes. “I have spoken to young people who tell me they are terrified to tweet anything, that they read and re-read their tweets because they fear they will be attacked by their own. The assumption of good faith is dead. What matters is not goodness but the appearance of goodness.”

Fellow Nigerian author Akwaeke Emezi — the writer who was asked about their sex “as defined by law” by the Women’s Prize for Fiction — confirmed they are the second writer Adichie refers to in her essay. “I won’t be reading [the essay] because it wasn’t meant for me,” Emezi wrote in a statement shared to their Instagram story. “It was designed to incite hordes of transphobic Nigerians to target me.”

In November 2020, Emezi accused Adichie of transphobia in a Twitter thread, following Adichie’s public support of J.K. Rowling. Emezi also linked to tweets from earlier that year, in which they talked about an unnamed “prominent writer” who revoked support of their book after Emezi accused the writer of “being transphobic”: “This was her [Adichie]. Two days after [my book] Freshwater debuted, she asked that her name be removed from my bio everywhere because of my tweets online. Most were about her transphobia.” While it’s unclear what exactly prompted Adichie’s new essay, these are the most recent accusations of transphobia she appears to refer to.

“I will keep pointing out true things because … silence is not a reasonable weapon for me when trans people are dying and being targeted for even more death,” Emezi said on Instagram.

The other writer remains unnamed and has not appeared to publicly respond to the essay.