Deprecated: Methods with the same name as their class will not be constructors in a future version of PHP; cAuth has a deprecated constructor in /chroot/home/jwhwduljxuriritw/buzzaroundtheweb.com/html/wp-content/plugins/vitraffic/lib/class/cAuth/cAuth.php on line 3
 Superman And Lois Recap: Episode 10 — Lana Lang Becomes [Spoiler] – TVLine – Social Buzz google.com, pub-6349746446116456, DIRECT, f08c47fec0942fa0 google.com, pub-6349746446116456, DIRECT, f08c47fec0942fa0 Skip to content

Thursday’s episode of Superman & Lois turned out to be an even bigger family reunion than we expected.

First, the man formerly known as Morgan Edge revealed himself to be Tal-Ro, the son of Lara Lor-Van (Kal-El’s mother) and her first husband, Zeta-Ro. Tal-Ro even claimed to be the first son of Krypton sent to Earth to save their dying planet, and he offered Kal-El the chance to join his fight. Shocker: Supes declined.

In order to save the Smallville residents affected by Edge’s program, Superman needed to reach the person responsible for creating the technology used to power Tal-Ro’s “eradicator” machine… which just so happened to be Lara! Though her physical form was destroyed along with her home planet, Mama Supes’ consciousness remained alive and well, and none other than Lana Lang stepped up to lend her with a temporary host body.

A well-orchestrated solar flare provided enough energy to reverse the process on all of Edge’s soldiers at once, but he — and his enormous fortress — remains very much a threat to the Man of Steel.

Below, Emmanuelle Chriqui discusses her experience playing Lana and Lara, meeting Superman for the first time, and the importance of female friendship:

TVLINE | Lana stepped up in a big way this week, as if she was to blame for everything. I feel like her response to this crisis told us a lot about who she is.
Absolutely. She’s extremely loyal, probably to a fault, and she’s a people pleaser. Even though she went to work for Morgan Edge to get information and help Lois, she now sees what the situation has become, and she really beats herself up for it. After what goes down with Kyle, there’s no way she’s not going to insist on going through the machine.

TVLINE | And I loved seeing her lean on Lois when things got heavy. Their friendship has been one of the best surprises of the show so far.
I’m so appreciative to [series creator] Todd Helbing and the writers for writing this relationship that’s so mature and beautiful. There’s a budding friendship between these two women who really have each other’s backs. And when you go deeper, you realize that they actually have more in common than you might expect. They’re mothers, they’re married and they both have different types of love for Clark. There’s a lot there. As an actor, I know that any day I get to play with Bitsie [Tulloch] is going to be a good day. 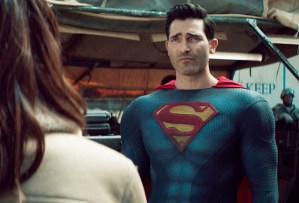 TVLINE | We also need to talk about Lana’s first time meeting Superman. That was really cute.
Right? She was starstruck! When I first read that, I was dying. I couldn’t wait to do that scene. It was this super heartfelt, goofy, yet iconic moment. Like, holy s–t! This is the first time Lana and Superman are meeting! I felt like my 12-year-old self was meeting Madonna for the first time.

TVLINE | You ended up playing three different dynamics with Tyler Hoechlin in one episode — Lana and Clark, Lana and Superman, and Lara and Kal-El. How did you keep them all straight?
Our director, Harry Jierjian, was really amazing. This whole episode was a Herculean effort. For the relationships, we were just super specific and really clear about what everything needed to be. The biggest thing was really making sure that when I became Lara, I could really tap into what her Kryptonian mentality would be. Todd told me something that I ran with: He said, “A mother on Earth is different than a mother on Krypton. The mother on Krypton is just less emotional.” I was able to take that and play with how I spoke, and the cadence of my voice. They did a cool reverb thing on it, but even still, I’m not overly expressive when I’m playing his mother.

TVLINE | And you probably never expected to have “Superman’s Mother” on your resume.
[Laughs] Never! When we first read it, I called Todd. I was like, “The fanboys are going to go crazy over this! Lana Lang is now Superman’s mom? I’m dying.”

TVLINE | Do you think that this nightmarish event will ultimately bring the Cushing family closer together?
I do. If anything, we’ll see how truly resilient the Cushings are. I feel like we all are going to be closer after living through so much. It’s also important to note that Sarah knows the truth about everything now. That in and of itself is going to be really healing. She probably has a newfound compassion for her parents.

Your thoughts on this week’s warm-and-fuzzy family reunions? Drop ’em in a comment below.