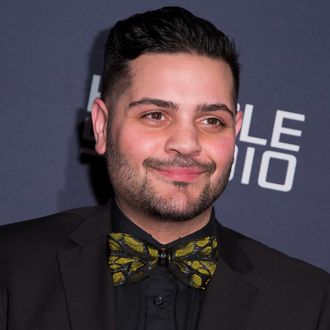 Hours after Chrissy Teigen published a second, longer public apology for harassing Courtney Stodden on social media in 2011, in one instance telling Stodden they should die, Project Runway contestant Michael Costello took to Instagram Monday evening to detail what he describes as a campaign by Teigen to ruin his career. ‘“I didn’t want to do this, but I can not be happy until I speak my mind. I need to heal and in order for me to do that I must reveal what I’ve been going through,” he writes. “I wanted to kill myself and I still am traumatized, depressed, and have thoughts of suicide.” According to the designer, the harassment began after Teigen left a comment on his Instagram page in 2014, accusing Costello of racism after seeing what he claims was a fake racist comment Photoshopped by a “former disgruntled employee” to publicly embarrass him.

“When I reached out to Chrissy Teigen to communicate that I was the victim of a vindictive cyber slander, and the everything she thought I was is not who I am, she told me that my career was over and that all my doors will be shut from there on,” Costello, who appeared on season eight of Project Runway and Project Runway All-Stars in 2012, says. “And wow, did she live up to her words.” According to the designer, friends and colleagues in the industry informed him that Teigen and stylist Monica Rose have allegedly “gone out of their way to threaten people and brands that, if they were in any shape or form associated with me, they would not work with any of them.”

‘So many nights I stayed awake, wanting to kill myself. I didn’t see the point of living,” Costello says, revealing that he wrote personal letters to family and friends in preparation for a suicide attempt last week. “I wish no harm on anyone and I don’t wanna go back-and-forth fighting with anyone. I just want people to realize that I, too, am human and this was the most inhuman treatment to ever be endured by someone who has seen their decades of hard work, years of building a brand, crumbled from one comment.”

In his post, Costello also includes images of alleged DMs with Teigen, who refuses to believe the designer’s claim that the comment she saw wasn’t real. “Racist people like you deserve to suffer and die,” the former Lip Sync Battle host allegedly writes. “You might as well be dead. Your career is over, just watch.”