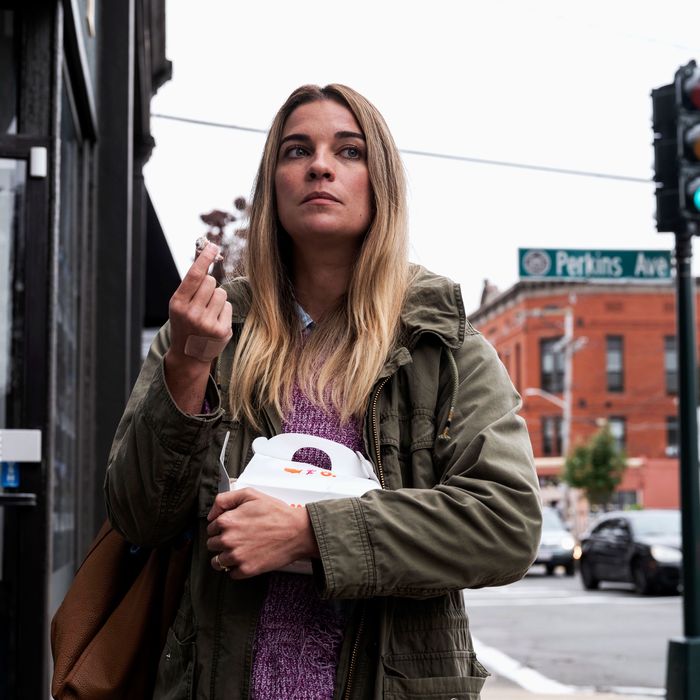 Kevin Can F**k Himself begins as many network sitcoms have countless times before: with a scene inside the illuminated living room of a blue-collar household where the husband, Kevin McRoberts (Eric Petersen), is earning chuckles for behaving like a jackass. When his wife, Allison (Annie Murphy), wanders in, she gets hit in the face with a ping-pong ball, referred to as “Mom” (she has no children), and reminded that her age is “lady 35” while her spouse’s is “boy 35.”

“I’m just hitting my prime and you …” — Kevin pauses awkwardly for comedic effect — “… are too.”

The arrested-adolescent male protagonist is the LOL machine, and his very attractive wife is the dismissed butt of the joke. Looks pretty familiar.

Then Allison walks into the kitchen and this trope-y world abruptly transforms. Suddenly, she’s in what appears to be a single-camera drama along the lines of Better Call Saul or Barry. Unlike the living room, the kitchen is dim, punctured by minor shafts of natural light. Allison’s face, begrudgingly indulgent during the previous exchanges, looks despondent and exhausted. As a ringing swells in her ears, she smashes a glass beer mug on the edge of the kitchen counter.

That last action is a metaphor for what Allison will attempt to do in the first, fascinating season of Kevin Can F**k Himself: destroy her current, unsatisfying existence with the hope of building a new life. It’s also a metaphor for what series creator Valerie Armstrong and showrunner Craig DiGregorio are aiming to do in this pointedly unconventional series: shatter the typical television structure as well as archaic ideas about gender that some traditional sitcoms have dwelled on for decades.

As described above, Kevin Can F**k Himself switches constantly between two formats — the multi-cam-style network sitcom that’s been a hallmark of television since its inception, and the more cinematic, laugh-track-free single-camera style that is the dominant form in contemporary television. The former acts as a metaphorical reflection of how it feels to be married to Kevin, whose irresponsible decisions and whims chart the course of the entire relationship. The latter is what Allison’s reality looks like when she’s not in Kevin’s company, both at home and out of the house, when she’s at her liquor-store job in her hometown of Worcester, Massachusetts, snarfing down Munchkins from the local Dunkin’ Donuts, or having conversations with potential ally and next-door neighbor Patty (Mary Hollis Inboden), the sister of Kevin’s best friend Neil (Alex Bonifer). In the first two episodes, which debuted Sunday on the streaming service AMC TV+ and will more officially premiere on AMC on June 20, Allison learns that Kevin has been reckless with their finances and lied to her about it, prompting her to come up with an extreme plan to get revenge and reclaim her independence.

The format switcheroo may remind some viewers a little of WandaVision, but Kevin Can F**k Himself is grounded in something more akin to reality. It also engages much more pointedly with the way television reinforces misogyny, rather than using it as a vessel for expressing grief. For Elizabeth Olsen’s Wanda, the sitcom fantasy provides an escape from feelings she is trying to avoid; for Murphy’s Allison, the sitcom construct is precisely what she wants to escape.

The title flips an obvious middle finger at Kevin Can Wait, the CBS Kevin James sitcom most famous for bumping off the wife of James’s character, played by Erinn Hayes, and making Leah Remini, who starred opposite James in King of Queens, the new female lead. Though it’s not specifically sending up that series, Kevin Can F**k Himself uses that sort of insensitivity and devaluation of women as a springboard into a much more meta consideration of onscreen gender roles. This is the kind of show that is entertaining, wry, and thought-provoking, and also seems destined to become the basis for a film-study major’s senior thesis.

Armstrong, DiGregorio, and the writers have deftly crafted these episodes — four of the first season’s eight were made available to critics — so that the multi-cam and single-cam story lines function separately but also progressively comment on each other. In the fourth episode, when Kevin launches an escape room in the McRoberts’ basement while Allison and Patty take a risky road trip, the parallel story lines illustrate the contrast between Kevin’s idea of “getting away” and Allison’s legitimate desire to flee. In the same episode, when Kevin, incapable of managing things on his own, keeps calling Allison in the multi-cam, it plays as a gag about how Kevin is so hilariously inept, but in the single-cam, we see how unnerving the constant calls are for Allison. What looks like just another silly man being silly on one side is a man being freakishly possessive on the other.

Kevin Can F**k Himself hopscotches between filmmaking styles and tones, but does so with an assurance that makes each episode feel cohesive. Directors Oz Rodriguez, who handles the first two episodes, and Anna Dokoza, who oversaw episodes three through eight, depict everything in the single-cam in a literally harsher light. They also capture the full breadth of the interiors, which, unlike the theatrical sets of the multi-cam, contain four walls, in a way that conveys the containment Allison feels.

Murphy, commanding the lead of a series for the first time after six seasons on Schitt’s Creek, really gets to demonstrate her range as Allison. Just as Kevin Can F**k Himself strikes multiple tones, Murphy often manages to find the comedy in moments that are also dramatic. In the pilot, when she unexpectedly slaps a mechanic in the face, she is so shocked by her own behavior that her eyes nearly bug out of her head. Then she immediately pivots and tries to assert herself — “The hell with that,” she says in her thick Massachusetts accent, “I’m not sorry.” — and then pivots again. “You should really ice that!” she shouts while dashing away in a panic. It’s a dense, rapid-fire piece of physical comedy that also does the work of highlighting that Murphy is just as good at that sort of thing as the skilled, deliberately over-the-top Petersen is in the multi-cam. She just doesn’t get a chance to demonstrate that until the series shifts to the version where Allison’s POV is moved to the forefront.

As Patty, the only principal character other than Allison who appears in both the single and multi-cam environments, Inboden initially projects the low-key hostility of a townie annoyed that she only gets five-minute cigarette breaks. But Inboden slowly reveals a believably softer, more compassionate side of Patty that enables her and Allison to meet each other in the middle.

That relationship, and the work the two women have to do to realize they should be more supportive each other, is as central to Kevin Can F**k Himself as Allison’s marriage to Kevin. Yes, this show is, in part, about a wife finally expressing her anger at her husband after years in a stifling, emotionally abusive marriage. But that title also implies that guys like Kevin, who were traditionally placed at the center of their own sitcoms for years, aren’t needed. Kevin Can F**k Himself proves that there’s a richer story to be told once the silently suffering wives and next-door neighbors are given the opportunity to shove the Kevins of the world out of the frame and take center stage.