Making one of her few public appearances since the death of her beloved husband Prince Philip, Queen Elizabeth II proved she hasn’t lost her humor while rubbing shoulders with world leaders at a G-7 reception on Friday.

The three-day summit of the leaders of the Group of Seven economies – Britain, Canada, France, Germany, Italy and Japan, along with the U.S. – began on Friday and will run through Sunday in the United Kingdom. Friday’s reception at the Eden Project, a botanical garden home to the world’s largest indoor rainforest, was hosted by the 95-year-old reigning monarch.

The queen broke the ice during a photo op alongside political figures including President Biden and British Prime Minister Boris Johnson. Sitting center stage as cameras flashed, Elizabeth quipped, “Are you supposed to be looking as if you’re enjoying it?” provoking laughter from the politicians.

“Yes,” Johnson responded. “We have been enjoying ourselves in spite of appearances.”

MEGHAN MARKLE, PRINCE HARRY WANT TO ‘KEEP THE PEACE’ WITH ROYAL FAMILY, SOURCE CLAIMS: ‘ALL IS NOT FORGIVEN’ 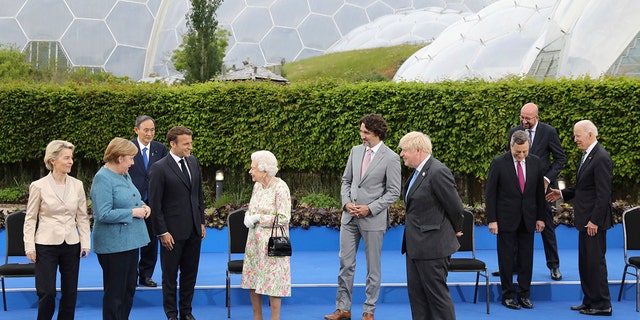 Also in attendance was the Queen’s son Prince Charles, who is heir to the British throne, as well as Prince William and his wife Kate Middleton. It was the British royal family members’ first major outing together since the royal funeral was held for the Duke of Edinburgh, husband of Elizabeth’s for 73 years, back on April 17.

The reception served as the queen’s first meeting with Biden. He is the 13th U.S. president she has met during her 69-year reign.

The queen’s memorable moment with leaders took place hours after First lady Jill Biden will met the Duchess of Cambridge for the first time. The two women joined an early childhood education roundtable and toured a preschool in Cornwall in southwest England. 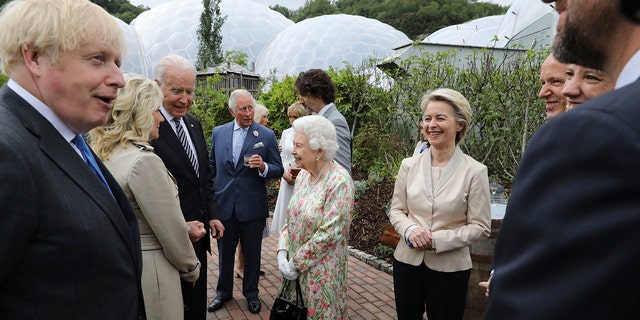 Britain’s Queen Elizabeth II speaks to US President Joe Biden and his wife Jill Biden during reception with the G-7 leaders at the Eden Project in Cornwall, England.
(Jack Hill/Pool via AP)

The first lady is a community college educator and Middleton has focused many of her royal efforts on children’s issues. The duchess previously met with the Obamas in 2011 and 2016.

On Thursday, the Bidens expressed their condolences on Prince Phillip’s posthumous birthday. The queen’s husband died at 99 years old on April 9.

“We are holding the entire Royal Family in our hearts today, and wishing them peace and comfort on what would have been Prince Philip’s 100th birthday,” Jill Biden tweeted.

15 Movies You Had No Idea Spawned Massive Multi-Film Franchises

Jennifer Lopez thought Ben Affleck was ‘the one that got away’ before rekindling romance: report – Fox News