Meghan Markle and Prince Harry are delighted to start a new life in California.

The Duke and Duchess of Sussex’s departures from royal duties began last year over what they described as the British media’s intrusions and racist attitudes towards the former American actress, 39. The family now resides in the coastal city of Montecito, Calif.

A close friend of the pair told People magazine in this week’s issue that they “are so happy.”

“This baby solidifies that they are creating roots here in the States,” the insider shared.

The Duke and Duchess of Sussex welcomed a baby girl on Friday.
(AP)

The baby’s name pays tribute to both Harry’s grandmother, Queen Elizabeth II, whose family nickname is Lilibet, and his late mother, Princess Diana.

Royal historian Robert Lacey told the outlet it was especially important for Harry, 36, to pay tribute to the reigning monarch, 95.

“She was a sort of stepmother for both Harry and William [after Diana died],” he explained. “We have all focused on her coaching William as the future king, but we are realizing now the importance of the emotional bonds that she’s been able to establish with Harry, and their ability to talk to each other directly. That affection remains.”

A source also claimed to the outlet that after the couple returned home from the hospital, they quickly introduced Elizabeth to her namesake via a video call.

“They were very excited and couldn’t wait to share that their daughter arrived,” the source alleged.

On Sunday, the proud parents confirmed the news to the world.

“Thank you for your continued kindness and support during this very special time for our family,” the Duke and Duchess of Sussex wrote in a statement.

The baby is “more than we could have ever imagined, and we remain grateful for the love and prayers we’ve felt from across the globe,” they continued.

The baby girl was born at 11:40 a.m. at the Santa Barbara Cottage Hospital in Santa Barbara, California, and weighed in at 7 lbs., 11 oz., a spokesperson for the couple said. The child is eighth in line to the British throne.

A Buckingham Palace spokesperson said the queen; Harry’s father, Prince Charles; his brother, Prince William; and other members of the family had been informed and are “delighted with the news of the birth of a daughter for The Duke and Duchess of Sussex.” 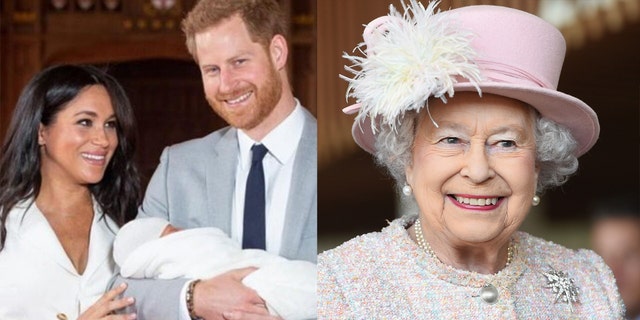 Markle became a member of the British royal family when she married Harry at Windsor Castle in May 2018. They welcomed a son named Archie Harrison Mountbatten-Windsor a year later.

The birth of the healthy baby girl opens a happy chapter for the couple following a miscarriage in July 2020. Markle gave a personal account of that traumatic experience in the hope of helping others.

Months before the miscarriage, the couple announced they were quitting royal duties and moving to North America.

Despite leaving royal duties, Harry’s place in the order of succession to the throne remains.

Lilibet’s birth moves Prince Andrew, who was born second in line in 1960, down to the ninth place.