Emily Ratajkowski was harshly criticized for her baby-holding technique in a series of photos posted to her Instagram account Monday.

“That’s not how you hold a baby @emrata – and your millions of followers shouldn’t be encouraged to do the same. Happy to give you some tips if you need them,” Piers Morgan, who is a father of four, tweeted at Ratajkowski.

Many people on Twitter hammered the model for appearing to use her 4-month-old baby, Sylvester Apollo, as a “prop … so her body is the center of attention.” Another user commented: “Gone is the little dog in a handbag, the new accessory is a baby in one arm and wearing candy floss. To show some sort of relationship, matching baby shorts.”

Not everyone was so quick to pile on Ratajkowski. Yahoo Life writer Korin Miller labeled the criticism “mom-shaming,” saying that “most people are aware” that it’s “bad.”

“Our biggest fear for parents is that we’re not good enough and shaming does a huge disservice,” Dr. Tamar Gur, a psychiatrist and women’s health expert at the Ohio State University Wexner Medical Center, told Miller. Gur characterized mom-shaming as “really hurtful and unfair” and said it “in some way comes out of hatred of women and lack of support for women.”

Ratajkowski, 30, is not unfamiliar with criticism surrounding her views on motherhood. When she announced her pregnancy via Vogue in 2020, she said she “won’t know the [baby’s] gender until our child is 18 and that they’ll let us know then.” Ratajkowsi expanded her sentiments, saying that gender is “more complex than whatever genitalia our child might be born with” and that her and her husband were focusing on “who — rather than what — is growing inside my belly.” 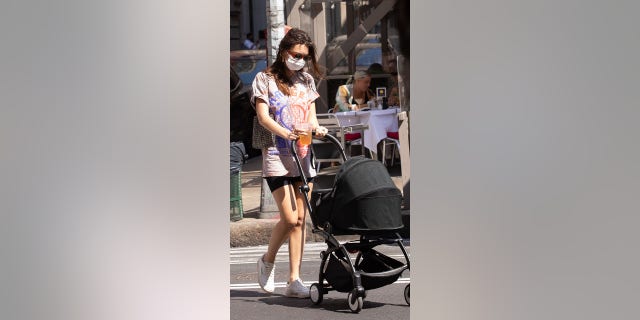 Emily Ratajkowski out for a walk with son Sylvester Apollo Bear on May 19, 2021, in New York City.
(RCF/MEGA/GC Images)

However, in March, the supermodel shared a photo of her breastfeeding her baby on Instagram with the caption, “beautiful boy,” catching the attention of her fans.

“Correct me if im wrong but wasn’t your baby gender neutral?” one fan commented. “Did you just misgender your baby?” asked another.

Others ultimately defended Ratajkowski in the comments, saying it’s not up to her fans to make decisions for her family.

“She can do whatever she wants to! It’s her baby.”